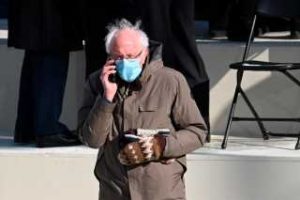 The “Chairman Sanders Crewneck” sweater, a black sweatshirt featuring the viral image of Sen. Sanders wearing his Burton winter coat, sustainable knit mittens and medical face mask, was added to the Bernie Campaign Store on Thursday. The sweater retails for $45 and all proceeds will benefit Meals on Wheels in Vermont.

Sanders’ inauguration look caused a frenzy on social media on Wednesday, with many praising him for his practical, cozy winter look and others turning the senator into a meme by placing his image in a variety of different settings, like the New York City subway, sitting atop former Vice President Mike Pence’s head during the vice presidential debate and in many TV and film stills.

A post shared by The People for Bernie Sanders (@peopleforbernie)

The senator reacted to his viral fashion moment during an interview on “Late Night With Seth Meyers” Thursday night.

“I was just sitting there trying to keep warm, trying to pay attention to what was going on,” Sanders told Myers. He revealed his team has been showing him his memes since Inauguration Day. When Myers asked the senator what was in the manila envelope he brought with him to the ceremony, Sanders replied, “I’d love to tell you Seth, but it’s top secret.”

Since Sanders’ viral moment, Jen Ellis, the teacher who gifted Sanders the sustainable mittens, has been inundated with requests for the accessory. According to data from global shopping platform Lyst, Sanders’ mittens caused searches for the accessory to increase by 311 percent. Searches for “upcycled mittens” also increased by 225 percent.