The black power suit is out: Women want orange or cerulean blue now 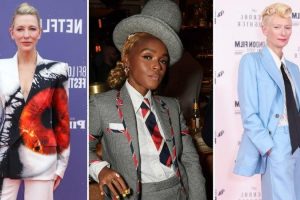 Whether suits are favoured by powerful women or whether tailored trousers and smooth lapels make them appear stronger, is a chicken and egg situation without the feathers. 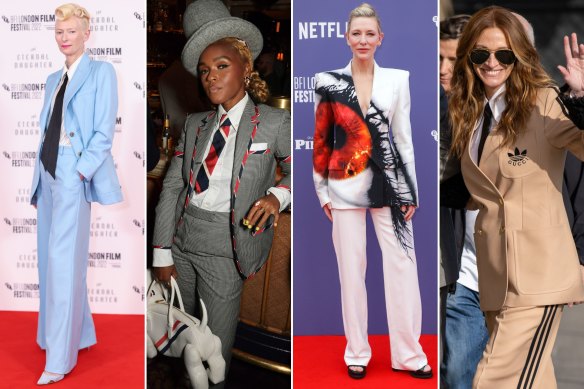 The tailoring trend is gathering speed, with Australian women leaning into outfits that offer modest coverage, ease of movement and ready access to pockets.

“There’s a new energy to the way that women are dressing, and the suit is becoming a popular option for women seeking outfits that take them from the desk to dinner,” says Melanie Levis, executive director of Cue.

“We are a brand that has usually done a lot of black. That’s part of our DNA, but the customer is moving towards playfulness and pops of colour. Last month our biggest selling trousers were bright orange, sky-blue and cerulean blue. We sell black trousers, but they didn’t make the cut.” 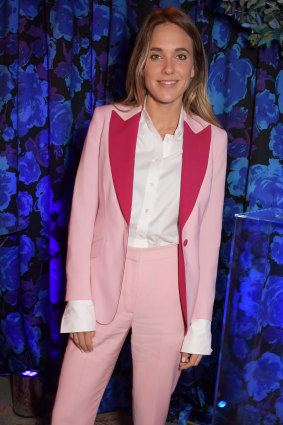 Daisy Knatchbull, founder of British women’s tailoring brand the Deck, in her own design.Credit:Getty

A three-piece sky-blue suit was another top seller for Cue, with Levis pointing to the versatility of suiting elements in a woman’s wardrobe.

“You can wear it to work with sneakers, a shirt to the office or to the races with a satin bra underneath,” she says. “With sneakers or heels, a suit is offering women options and the opportunity to be playful. It’s not about having a uniform.”

Daisy Knatchbull, the great-granddaughter of Lord Louis Mountbatten, understands the popularity of the suit as an option for trackside dressing, having been the first woman to wear a top hat and tails in the Royal enclosure at Ascot in 2016. Three years later she launched The Deck, a British tailoring business targeting women.

“At first, I didn’t think they would let me into the Royal Enclosure as the dress code is so strict,” Knatchbull says. “Once I was allowed in, I saw a few men tutting to themselves, but I actually got a round of applause and throughout the day women came up to me and congratulated me for being brave and breaking the boundaries. It was at that moment the penny dropped and The Deck was conceived.”

It’s a move that paved the way for the Victoria Racing Club to change the rules of the Fashions on the Field competition for the Melbourne Cup carnival, starting with Derby Day on Saturday, with women now eligible in the Best Suiting category.

“They are particularly suitable for a day at the races, when so many women dress up in their finest frocks, I think a suit really makes you stand out from the crowd. It gives off a strong statement of confidence and innate style.”

For Knatchbull a tailored suit is an essential investment piece in a woman’s wardrobe, transcending seasonality. Australian tailors P Johnson also encourage women to engage with the tailoring process by exploring fabric options.

“It is hard to beat merino wool, which is breathable, elegant and naturally elastic,” says Tom Riley, director of P Johnson. “It’s elastic without the use of elastane, which tends to make cloth a little less breathable.”

“Silk is also a beautiful option that is perhaps misunderstood at times. It is versatile and fresh to wear, drapes beautifully and takes to many weaves and finishes like dupioni, shantung and milled twills.”

Riley says customers should think about the potential of suit pieces as separates and will sometimes steer women away from slim cuts.

“Straighter and longer lines are most powerful and elegant,” he says. “High rises and longer jackets emphasise height and add stature. Think about something you can wear a lot.