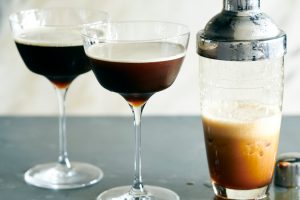 One need only look at our 21st-century devices — or out our old-fashioned windows — to know that 1990s nostalgia has reached, maybe even surpassed, fever pitch: A TikTok from Alicia Silverstone with a “Clueless” reference has more than 40 million views; Olivia Rodrigo’s chart-topping “good 4 u” video was inspired by, she said, “cult ’90s feminist horror movies”; and the recent “Friends” reunion drove record sign-ups for HBO Max. And that’s not to mention the ’90s resurgence that’s been happening in fashion.

Making its grand return to the zeitgeist alongside it all is the sweet, the strong, the satisfying (to some) … espresso martini.

In its most classic form, the drink is freshly brewed espresso, coffee liqueur (like Kahlúa or Mr. Black) and vodka, shaken and served in a chilled martini glass with three roasted coffee beans as a garnish.

The origin of the espresso martini is tied up in lore: The cocktail is attributed to Dick Bradsell, a bartender who worked at Fred’s Club, a London bar, in the 1980s. By Mr. Bradsell’s account, “a young model who’s now famous” walked into the bar and asked for “a drink that will wake me up and then” mess her up (though she was more deliciously crude).

About a decade later, the drink began appearing on cocktail menus, sometimes listed as “vodka espresso.”

After its heyday in the late ’90s, espresso martinis — in all their boozy, creamy, cloying and terroir-less wonder — gave way to more subtle drinking trends: natural wines, low-alcohol cocktails or mocktails, bitter drinks over sweet ones.

But what goes around almost always comes back around. In the late 2010s, the espresso martini started making guest appearances on at least two Bravo reality shows: “Summer House” and “Below Deck.” (More on that later.)

Naturally, the booming canned cocktail industry got in on the action. In 2019, Kahlúa and Deloce, which dedicates itself to the cocktail, created a canned espresso martini.

Not surprisingly, modifications have been made. BuzzFeed published a sponsored recipe for a version made with oat milk, and there is the inevitable CBD version.

Things are still buzzing. In the first six months of 2021, “the rate of mentions of espresso martinis in U.S. food and restaurant reviews is up nearly 300 percent from the same period three years earlier,” according to a representative for Yelp’s data science team, which traces trends through mentions of dish names in reviews from users.

Kyle Cooke and Amanda Batula, cast members of the Hamptons-based reality show “Summer House” and founders of Loverboy, a canned cocktail company, rolled out their canned espresso martinis in April 2021.

“We don’t have the biggest audience, but I’d say we are one of the biggest influences in terms of alcohol trends,” Mr. Cooke, 38, said of his show. Beginning in the summer of 2019, they and their fellow castmates ordered many an espresso martini upon sitting down to dine at a restaurant. “We were drinking rosé pretty heavily in 2016, and let’s just say, in 2017, we generated a lot of impressions for Whispering Angel rosé.”

Of all the ubiquitous cocktails of the ’90s, it’s curious that the espresso martini is the one to resurface in popular consciousness. The Cosmo, for example, may feel more fitting, given the announcement of HBO’s “Sex and the City” revival. So why is the espresso martini the one haunting us at every turn?

Kate Chastain, a “Below Deck” cast member who worked on the yacht at the center of the show, says she and her fellow yachties “work hard and play hard” and crave caffeine with their booze after a long shift. (She also says she tries an espresso martini in every country she visits.)

Ms. Chastain, 38, considers the relationship between espresso martinis and the Bravo universe as a chicken-or-egg paradox: Did reality TV stars (re)popularize the drink, or are their tastes a symptom of larger American trends?

Coffee culture flourished during the pandemic, most notably on TikTok (remember dalgona coffee?). Ty Bridgwater, 23, began a series of iced coffee reviews on the app in January 2021, and some have been viewed 6.7 million times.

Mr. Bridgwater uses TikTok’s “duet” function for his commentary on other users’ coffee-based drinks, some of them boozy. Videos with the hashtag #icedcoffee have more than two billion views, and the hashtag’s landing page reads, “It’s not just a drink, it’s a lifestyle.”

The appeal of mixing uppers and downers needs little explanation: Consider the popularity of vodka with Red Bull among clubgoers, or the appeal of Four Loko among pre-gaming college students (at least, back when it was caffeinated).

Now, as the United States approaches the post-pandemic era, that enthusiasm for caffeine will be put to good use. Bars are reopening, parties are returning, and many of us are tired (it’s been a long 15 months). This is a cocktail designed for a reawakening, and we’re on the precipice of a grand one.

Which is not to say that the drink doesn’t have its detractors. “I’m convinced this is some conspiracy,” said Andrea Hernández, 31, who writes a newsletter about upcoming food and beverage trends. She has been tweeting about the ubiquity of the espresso martini since April, when she began to feel that “it was a trend that was going to be forced on us, like it or not.” For now, she says, she’ll stick to her preferred drink: a dirty martini.