The Evolution of Lingerie Fashion Events 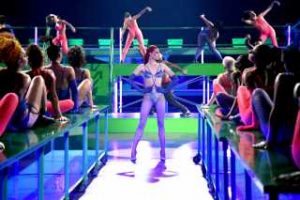 Rihanna’s Pride party included drag queen Adore Delano singing in a red Savage x Fenty robe. She was surrounded by multicolored balloons and streamers in what looked like it could have been the auditorium of a high school prom.

The party also included musical sets by Saucy Santana and Taylor Bennett in different virtual rooms, along with dance classes led by CJ the Trainer, while the innerwear brand’s Pride campaign video played in the virtual lobby and guests from all over the world logged on for Thursday night’s free digital event.

“Check out the new Savage x Fenty drop,” the host said, while wearing what looked like a Savage x Fenty men’s robe, nothing on underneath — at least from the waist up.

It was a fitting way to end the brand’s monthlong Pride celebration, one that started with the launch of Rihanna’s Savage x Fenty’s first Pride capsule collection, a dual-gender assortment that included things like mesh bras with rainbow embroidery, knee-high stockings, smoking jackets, jockstraps and kitty whips. It is all meant to empower women, and men, too.

The collection and Pride party follow Rihanna’s popular Savage x Fenty lingerie shows, the third and most recent of which was streamed on Amazon Prime. The show featured a mix of “real women” and high-profile models — some of whom also walked in Victoria’s Secret Fashion Shows — rocking fishnet bodysuits, balconette bras and lots of neon. The event was widely hailed for its inclusivity, thanks to its use of men and women of all different shapes, sizes and ages, including pregnant women, models with disabilities and varying skin tones and waistlines. 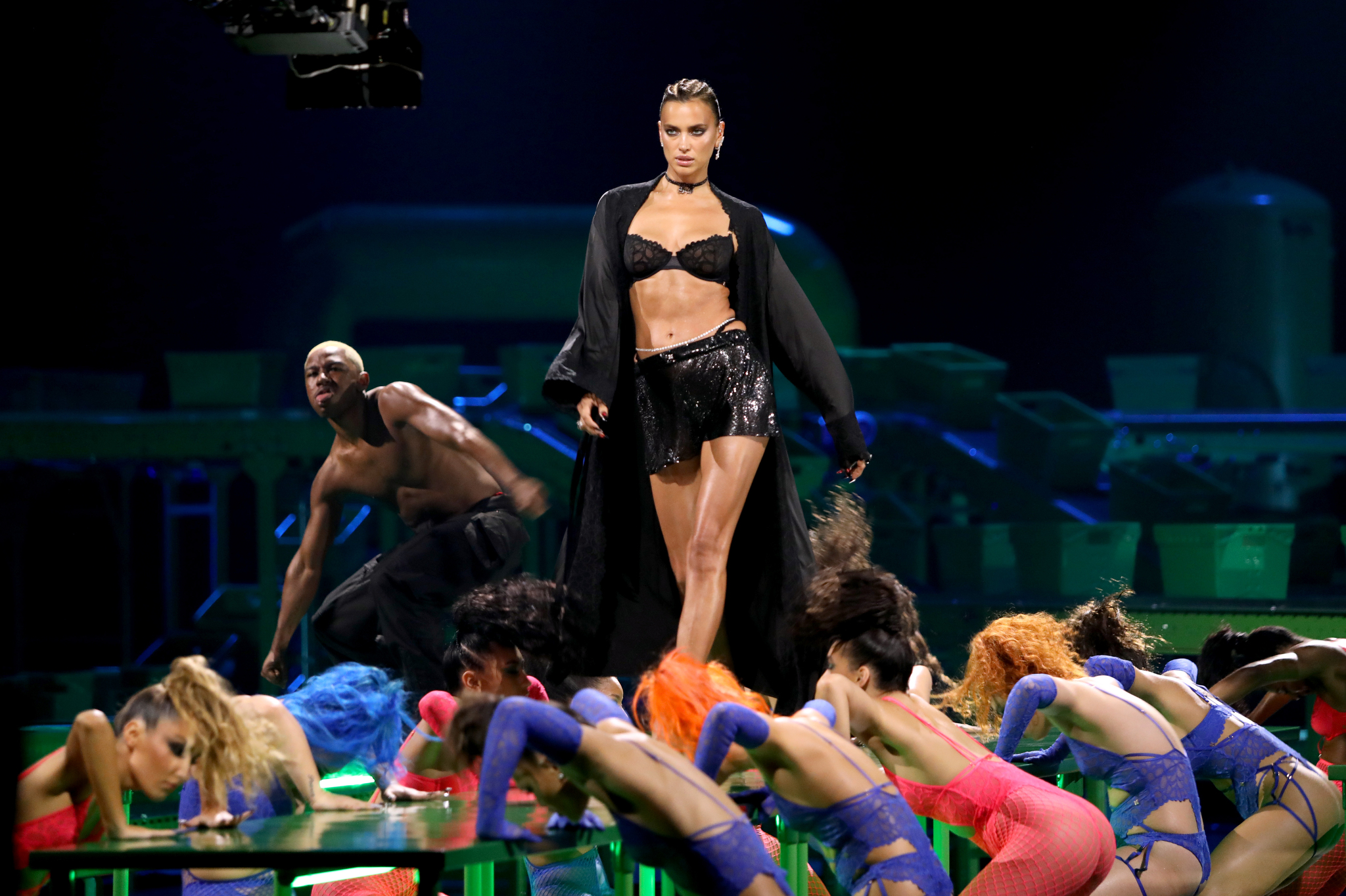 Of course, Savage x Fenty isn’t the only lingerie promoting diversity and inclusion, nor is it the only intimates brand to throw some kind of fashion event to encourage variety. Kim Kardashian West arrived at Nordstrom’s Manhattan flagship in early 2020 for an impromptu fashion show, complete with a skin-toned colored carpet for the models of various shapes, sizes, skin tones and ages to show off the Skims’ brand. She’s also recently hosted a pop-up in Los Angeles. 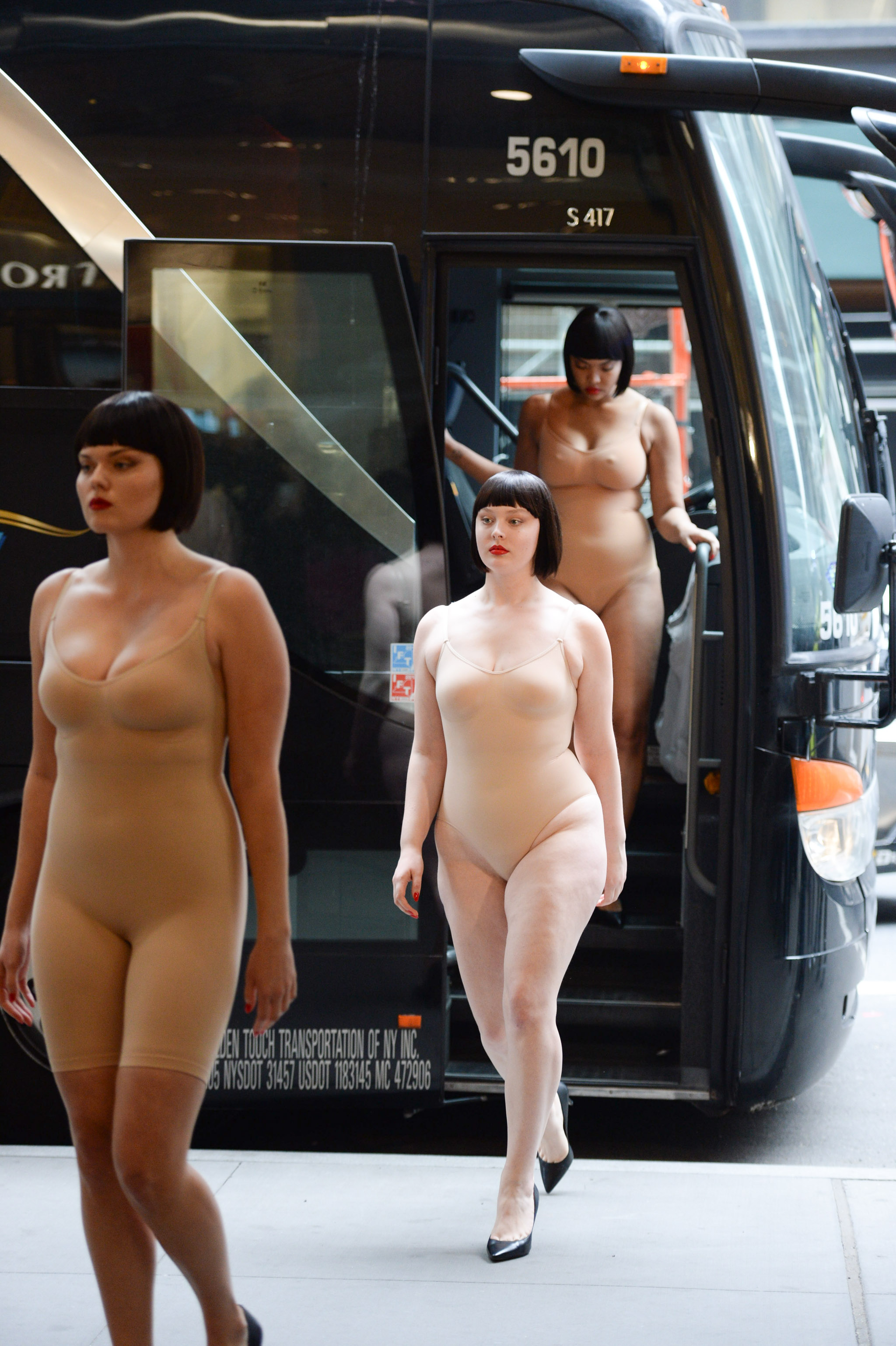 Kim Kardashian West’s shapewear brand at its Nordstrom debut in Manhattan with models of all different sizes and shapes. Andrew Morales/WWD

American Eagle Outfitters’ Aerie has been boosting the intellectual merits of its Aerie Real role models — a stark contrast from Victoria’s Secret Angels — since 2016. These are seen as women other women and young girls can look up to. Events included dinners, free yoga classes hosted by the role models and the Aerie Real Summit in March 2020 — all of which the role models were fully dressed.

Even Victoria’s Secret, after canceling its fashion show in 2019, has held other events and campaigns, like Pink With Purpose, an annual scholarship that awards financial assistance to young women and men making change in their communities. Its most recent efforts, the VS Collective, is meant to “positively impact the lives of women,” according to a company statement. 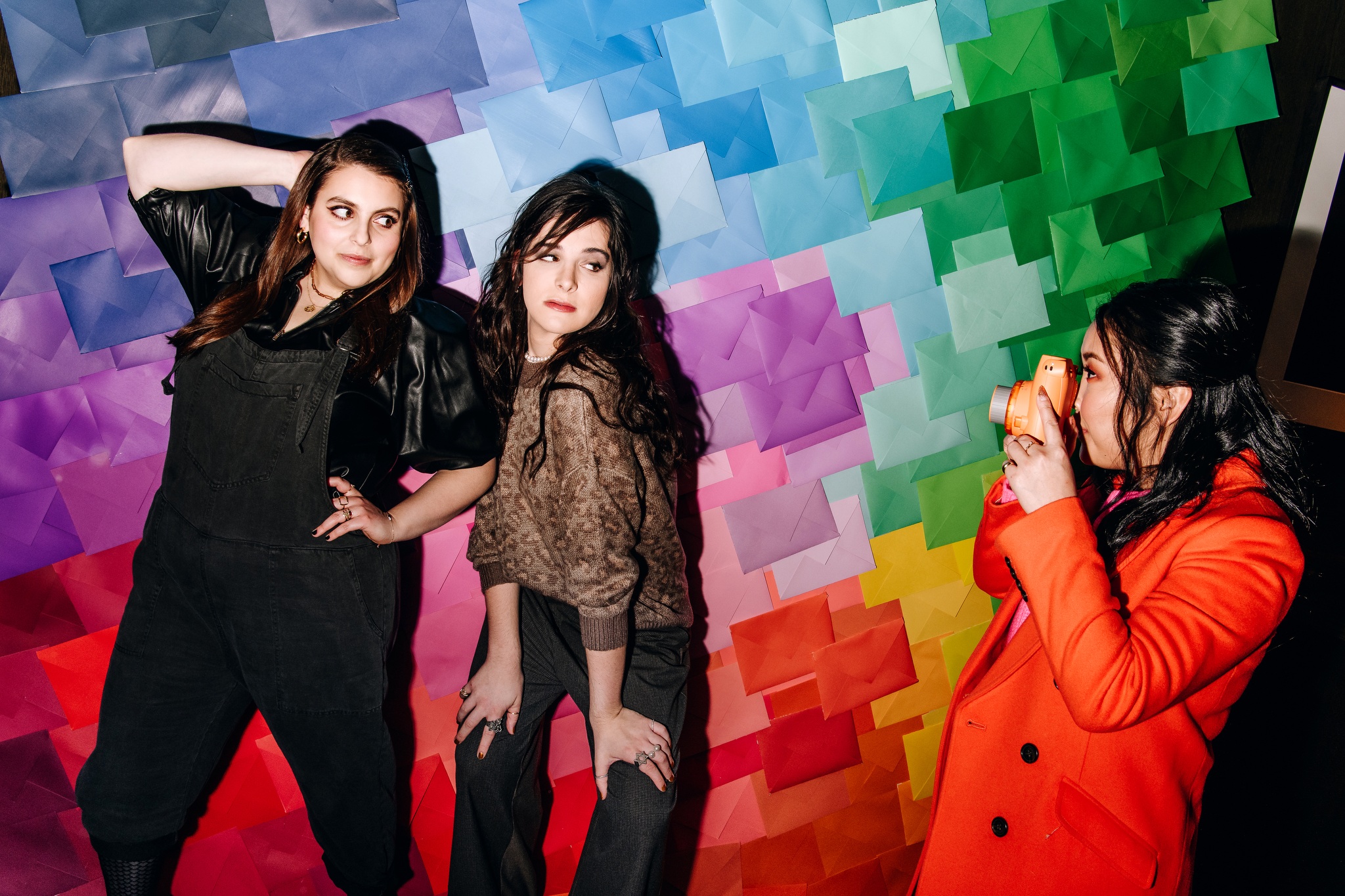 All of these innerwear events, while packaged and promoted differently, are hoping to send the message that they’re empowering women. It drives the question, what exactly is empowering about buying underwear? And why did it take a revolution in the lingerie industry — something worn underneath clothes — to reshape the way fashion is presented to women?

“I prefer to reframe the issue [to], ‘Why in a world where the customer has so profoundly evolved both their values and their behaviors, have fashion and lingerie been so slow to change?” Catherine Sadler, chief executive officer and executive creative director of Sadler + Brand, a branding strategy and consulting firm, told WWD. “For years, the fashion and lingerie industries have resisted the very notion of diversity and inclusivity. Long before COVID-19 and the #MeToo movement, women were simply not seeing themselves represented — their bodies, their color, their uniqueness, their abilities or disabilities. The model of womanhood basically overtly stated ‘You don’t belong,’ [and] ‘If you don’t fit this narrow ideal, then you aren’t sexy.’ The lens was narrow and decidedly male.

“Savage x Fenty has understood the zeitgeist shift from the get-go,” continued Sadler, who also served as global chief marketing officer at Banana Republic for more than five years. “Their fashion shows are disruptive because they saw the white space and built their brand based on the belief that women want to be seen for who they are in all their glorious diversity and want to define sensuality on their own terms.”

Rihanna has also always understood the power of a personal brand, so much so that it has caused envy within the lingerie world. After all, there are other brands that promote diversity and inclusion, using both a wide array of models and offering a more extensive size range: Aerie, ThirdLove, Adore Me and Playful Promises to name a few. There are many more.

But the multihyphenated pop star used her celebrity power to catapult the brand at a time when shoppers were hungry for something new.

“Rihanna came through at the perfect time with Savage X,” said Cora Harrington, founder and editor and chief of the Lingerie Addict blog and author of the book “Intimate Detail: How to Choose, Wear and Love Lingerie.” “There was peak discontent with the lowest point with Victoria’s Secret.” 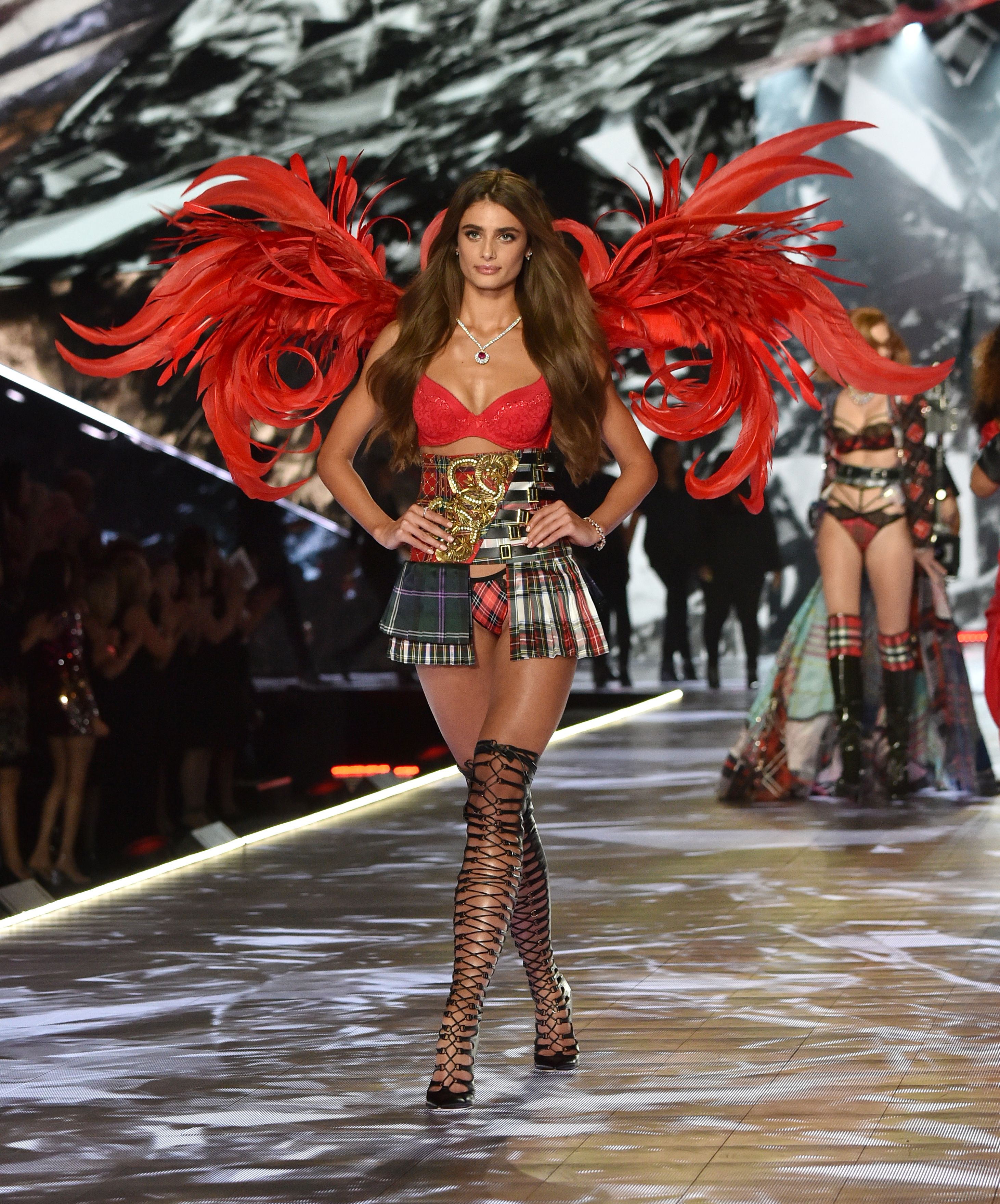 Still, one could argue that Victoria’s Secret was also in the right place at the right time — and benefited from it for decades. The Angels and star-studded fashion shows in the early 2000s came about pre-social media and pre-cell phones, when it was still easy to hold exclusive events that few people would see and images of beautiful women were not plastered all over the internet. These days, anyone with a smartphone can broadcast video or pictures worldwide.

Which is why, as Harrington pointed out, having a large marketing presence doesn’t necessarily equate to more market share or brand success.

“There are brands that are very large but that are not participating in this marketing scramble,” Harrington said. “For example, Hanes. They’re a very successful intimates apparel brand and they don’t do any fashion shows; they don’t do any pop-ups. They don’t do any dinners. They just sell lots and lots of underwear.

“And we don’t know what Savage X’s numbers are, as far as profitability, as far as how much underwear they’re selling,” continued Harrington, referring to the private company co-owned by TechStyle Fashion Group. “What we do know is that they have an outsized presence in people’s consciousness. That says a lot about how many people are paying attention to Rihanna and what people want to see from future fashion shows and future representation. They don’t want a certain ideal forced onto them. They don’t want to be told that this is what you should want and this is how you should want to look. Consumers want to be made to feel like they’re fine as they are.”

Meanwhile, Victoria’s Secret still owns the biggest slice of the U.S. women’s intimate apparel pie, (16 percent as of spring 2020, according to The NPD Group’s consumer tracking service). They also have approximately 933 company-owned stores around the world, many in parts of the U.S. that are lacking other in-person lingerie shopping options, and sold more than $7 billion in 2019, pre-pandemic. In addition, L Brands recently updated its board to six out of seven female members.

All the more reason why the lingerie giant said it will likely come out with some sort of new, updated version of its annual fashion lingerie event in 2022.

“When we do bring something back, it’s not going to be the show that was, because the world has changed and entertainment has evolved,” Raúl Martinez, creative director at Victoria’s Secret, told WWD earlier this month. “The evolution of fashion shows in general, I think, everyone is trying to discover what that is, what that experience is. So, what that will look like is what we’re discussing right now.”

Just what that will be is still unclear. Either way Victoria’s Secret is under immense pressure to rebrand itself in a more positive light.

“Victoria’s Secret is going to need to find its own way,” Harrington said. “Rihanna’s fashion show and influencer campaigns are working really well for Savage X. Aerie’s Role Model program is working well for them. Kim [Kardashian West’s] pop-ups are working well for her. Victoria’s Secret doesn’t know what they want to look like in the future. They don’t have a cohesive brand vision right now. All they know is that they’re running away from what they were in the past.”

As feminist and LGBTQ author and former Nylon editor and chief Gabrielle Korn wrote in her book, “Everybody Else Is Perfect: How I Survived Hypocrisy, Beauty, Clicks and Likes,” “I don’t think being woman-owned and -operated makes your company inherently feminist. Corporations have learned the language of contemporary digital feminism. Women every day are starting their own brands, using the language and aesthetics of empowerment in order to appeal to young, feminist-identified women, without ever making it clear what is so empowering about their product.”

Sadler noted, in the end, what consumer really want is freedom of choice.

“Diversity and inclusion are table stakes today,” she said. “But so is innovation and entertainment — whether that’s by going behind the scenes, simultaneously shopping on Amazon or through more artistic endeavors as we’ve seen recently. Bottom line: the customer will demand richer experiences [in the future] where they feel seen and heard in the moment.

“It isn’t really about sexy bras and panties,” Sadler continued. “But rather, how good you feel in your own skin and the confidence that enables you to feel and express your best self — when and how you choose.”