Home » The House of Gucci: A Complete History and Timeline 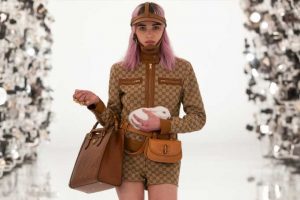 Just like the long-lived mythological phoenix, Gucci has cyclically regenerated, reaching its centenary in 2021, passing through family feuds, take-over attempts, a near-bankruptcy, a public listing, storybook turnarounds and even a murder — which has sparked the Ridley Scott film “House of Gucci” starring Lady Gaga — but the allure of the brand is enduring.

An allure that was carefully crafted by the founder himself, Guccio Gucci, who in 1897 found work at London’s prestigious Savoy Hotel as a bellboy. Famously, the tale goes that he was inspired to create his company by the luxurious suitcases and trunks carried by the aristocrats staying at the hotel. The original storyteller, Gucci associated the brand with luxury and those aristocrats’ pastimes, such as horse-riding —  hence the brand’s signature horsebit decorative element.

In 1921, Gucci’s first stores opened in Florence, where he founded the company. The boutique in Rome’s luxury shopping street Via Condotti opened in 1938.

Gucci was not one to lose heart and, as a result of a League of Nations embargo against Italy, he found alternatives to imported leather and other materials in the 1935-1936 period, developing a specially woven hemp from Naples, printed with the first signature print — a series of small, interconnecting diamonds in dark brown on a tan background. This served to launch the brand’s first successful suitcases.

Production of leather goods resumed after World War II, and Gucci’s son Aldo introduced the pigskin, which became a signature house material. The first bamboo-handled bag, inspired by the shape of a saddle, is thought to be produced in this period.

In addition to Aldo, Gucci and his wife Aida had two other sons, Vasco and Rodolfo.

In 1948, Maurizio Gucci was born to Rodolfo and his wife, Alessandra.

In 1951, Rodolfo opened the first Milan store, on Via Montenapoleone. Around this time, the green-red-green web became a hallmark of the company.

In 1953, a pioneer if Italian design in the U.S., Aldo Gucci opened the first American store in the Savoy Plaza Hotel on East 58th Street in New York. Guccio Gucci died at age 72, 15 days after the New York store opening. The Gucci loafer with metal horsebit was created that year and in 1985 it would be displayed at the Metropolitan Museum of Art in New York, becoming part of the permanent collection.

The house’s crest became a registered trademark in 1955.

In 1961, stores opened in London and Palm Beach and the bag that Jacqueline Kennedy was seen with was renamed the Jackie, which would be relaunched in 1999 in many colors and variations to great success, opening the era of the Gucci “It” bag.

In the early ‘60s, the GG logo was applied to canvas and used for bags, small leather goods, luggage and the first pieces of clothing.

In 1966, the Flora scarf print was designed for Princess Grace of Monaco. The pattern has become iconic for Gucci, revisited by creative directors Frida Giannini and, most recently by Alessandro Michele in his Aria collection.

In 1972, Gucci opened a store in Tokyo and Maurizio Gucci, Rodolfo’s son, moved to New York to work with his uncle Aldo until 1982. Around this time, the brand hit its fashion stride. A store dedicated to clothing opened at 699 Fifth Avenue in New York, while 689 Fifth Avenue focused on shoes, bags, luggage and accessories.

Gucci’s first fragrance was launched in 1975 and scents would continue to be a stronghold for the company, from Gucci Guilty and Flora by Gucci to Gucci by Gucci and Gucci Bloom.

In 1981, Gucci showed ready-to-wear for the first time at the Sala Bianca in Florence, playing heavily on the Flora print.

In 1982, leadership of the company passed on to Rodolfo Gucci and the following year to his son Maurizio, who was the first to dream of the relaunch the family brand, which had lost its exclusivity and luster, as it became associated with cheap duty-free bags.

In 1989, Maurizio Gucci teamed with Bahrain-based investment banking and asset management company Investcorp, which purchased 50 percent of Gucci shares from the family — Aldo was the last to accept to sell.

Maurizio Gucci’s intuition was to call Dawn Mello, then president of Bergdorf Goodman, to revitalize the brand. She brought Richard Lambertson, head of Bergdorf’s accessories department, to be the design director and in 1990 American designer Tom Ford joined the company to oversee women’s ready-to-wear.

Gucci’s restructuring was hit by a difficult retail market in the early ‘90s while customers had to adjust to a new and more sophisticated product, and in 1993, Maurizio Gucci transferred his shares to Investcorp, ending the family’s involvement in the firm.

In 1994 Ford was appointed creative director. His first collection, for fall 1995, focused on jet-set glamour and was a critical and commercial success, putting the label back at the forefront of fashion.

On March 27, 1995, Maurizio Gucci was gunned down in front of his office in Milan.

For nearly two years the identity of Maurizio’s killer remained a mystery, until it was revealed that his ex-wife Patrizia Reggiani — through her spiritual adviser —  had hired a hit man to end his life.

The year Maurizio died, Gucci went public on the New York and Amsterdam stock exchanges, as the company thrived under the lead of CEO Domenico De Sole and Ford — dubbed the Tom and Dom Dream Team, becoming architects of the ultimate luxury brand revival.

De Sole, previously CEO of Gucci America Inc., began reining in licenses, franchises and secondary lines to reverse a decade that saw the overexposure of the brand and the cheapening of its image.

In the mid-’90s, Ford’s collections set the sleek, sexy, modern style of the house’s look and established it as a brand dedicated to evening glamour, attracting Hollywood A-listers.

De Sole and Ford became friends and allies in what would become a history-making war with LVMH Moët Hennessy Louis Vuitton.

A few years after Ford’s breakout, the company piqued the interest of Prada, which took a 9.5 percent stake. Between June 1998 and February 1999, LVMH chief Bernard Arnault began to amass Gucci shares, eventually building up a stake of 34.4 percent through a series of transactions, before attempting a takeover, which was eventually foiled.

De Sole and Ford had cried foul, igniting what was one of the most dramatic corporate fashion battles of the 20th century. Gucci accused LVMH — which by then had swallowed up Prada’s stake in the company — of wanting to take “creeping control” without launching a full and fair bid to shareholders. That move would have been perfectly legal in the Netherlands, where Gucci was listed.

Arnault’s French rival François Pinault rode in as Gucci’s white knight, and brought the company into what was then PPR, and is now known as Kering.

The two companies fought bitterly in the Dutch courts — and in the international press — and swapped lawsuits and vitriol on an almost daily basis.

More lawsuits ensued following PPR’s purchase, and LVMH finally forced its French rival to launch a full and fair takeover of Gucci, which it did on Sept. 10, 2001. Ultimately, PPR won full control over Gucci.

In the ensuing years, De Sole and Ford shifted their focus: Gucci morphed into Gucci Group, and the two set about spending the $2.9 billion from the PPR deal. In less than three years, they bought Yves Saint Laurent, Balenciaga, Bottega Veneta, Alexander McQueen, Stella McCartney, Boucheron and Bedat.

Tensions built between the new management and Ford and De Sole, who eventually left the company in 2004  after trying — and failing — to strike a deal for management, financial and creative independence.

During the celebration for the 70th anniversary of its Roman store, the 2009 cruise collection show was live-streamed on the website.

In 2010, the Singapore Paragon Gucci store reopened, and the city-state celebrated Giannini with a special orchid, the Paravanda Frida.

Giannini proposed clothes with a functional chic and a hefty dose of the essential house glamour. The designer and di Marco, who grew to become partners in life, emphasized the brand’s Italian craftsmanship, archival iconography and jet-set lifestyle.

In December 2014, following a slowdown in sales, di Marco exited the company, followed a month later by Giannini.

Quickly assembled in only a few days, following the sudden exit of Giannini a week earlier, that men’s fall 2015 collection sowed the seeds of Michele’s style, which would help return Gucci to the fashion forefront, cater to a younger customer and fueling growth exceeding 35 percent for five consecutive quarters by the first quarter of 2018, prompting Bizzarri to set a 10 billion euro revenue target for the brand in June that year.

Michele revisited Gucci’s iconic GG logo, canvas bags and horse-bit loafers, which he turned into fur-lined slippers and clogs, further driving sales of the accessories division — historically a cash cow for the brand. Logo bags came hand-painted with flowers or embroidered with big insects — a theme dear to Michele, who continued to explore it over the seasons.

Five years after his debut at Gucci, in the midst of the global COVID-19 pandemic, Michele abandoned what he has called “the worn-out ritual of seasonalities and shows to regain a new cadence, closer to my expressive call. We will meet just twice a year, to share the chapters of a new story,” conceiving new names for the collections and inspired by the music world.

Michele directed with Gus Van Sant a series of seven episodes for his collection “Ouverture of Something That Never Ended” in November 2020, tapping the likes of Billie Eilish, Harry Styles and Florence Welch, among others.

In April 2021, marking the brand’s 100th milestone, Michele presented his “Aria” collection, revisiting a number of Gucci signature designs, from the Bamboo bag to the Flora motif, and introducing an innovative tie-up with Balenciaga.

Gucci is sure to get an extra dose of attention from the “House of Gucci” movie being filmed in Italy and expected to premiere in theaters on Nov. 24, with Lady Gaga playing Patrizia Reggiani, Adam Driver as Maurizio Gucci and Al Pacino in the role of Aldo Gucci. Reggiani, who was due to spend 26 years in jail, was freed after 17 years. Although she openly admitted hating her ex-husband, she denied ever wanting to kill him.