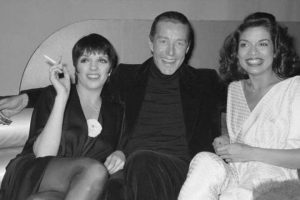 Written by Naomi May

Studio 54, the Manhattan club revered by every 70s socialite worth their salt, was a treasure trove of luscious lamé and glitzy get-ups.

Netflix drama Halston, which tells the story of Iowa-born milliner-turned-fashion designer, and fixture of New York’s once ritziest club, Studio 54, Roy Halston Frowick, has resurrected an interest in all things 70s.

The five-episode mini-series, which stars Trainspotting’s Ewan McGregor as the hedonistic protagonist, has whet our collective appetite for the more-is-more, high-octane glamour of what was the mecca of New York’s disco scene, Studio 54. The designer, around whom the series orbits, called the city’s It girls of the time – Liza Minnelli, Bianca Jagger and Diane von Furstenberg – his friends and muses, all which added to his appeal. Indeed, the designer rapidly became revered for his form-fitting silhouettes and propensity for luxurious materials and textures in his wares.

The cast of Halston in their Studio 54 ensembles.

And while the costumes in Halston are, unsurprisingly, as glitzy and high-voltage as they come, the real thing – the fashion that made Studio 54 the hotspot that it once was – was, dare we say it, even better.

Studio 54, which first opened its doors in April of 1977, had one rule: “Anyone who was allowed in was totally free inside.” While there was no prescribed dress code to attend the club, which was only open for a total of three years before shuttering its doors, there were a few sartorial rules which went unspoken between the club’s co-founders, Ian Schrager and Steve Rubell, and the club’s doorman, Mark Benecke.

Bianca Jagger holds doves while at a party thrown by fashion designer Halston at Studio 54.

“The only thing that it’s not based on is money,” Rubell was filmed saying when questioned on who he lets in. “Really fun-loving. We want people who are just in there to have fun.” According to former security staff though, there was one item which was famously banned: polyester shirts. Why? Because they “melt under the lights”.

Whatever lay behind the gilded velvet ropes of Studio 54, it was the style spot for a hot minute. From Bianca Jagger, who famously once arrived on a horse while wearing a scarlet Halston design, to Cher and Dolly Parton, Studio 54 was a one-of-a-kind magnet for fashion’s most outré dressers. Here, we’ve rounded up the starriest and glitziest looks that graced the legendary Studio 54.

Grace Jones looking sensational in a crochet dress of sorts while partying at Studio 54 in New York, 1978.

Bianca Jagger, Halston and Liza Minnelli at Studio 54 ahead of Minnelli’s 32nd birthday party in 1978, with Halston in his signature black turtleneck and Jagger and Minnelli in two of his satin designs.

Bianca Jagger with designer Calvin Klein at Studio 54 in 1980, with the former wearing a gold lamé blazer dress.

Dolly Parton attending Studio 54 in 1978 with a dazzling pink eyeshadow and wearing a black glittery cape-dress.

Grace Jones and Olivia Newton-John at Studio 54 in June 1978.

Attending the Grease premiere party at Studio 54, Olivia Newton-John can be seen wearing a pink and red satin jacket-shirt ensemble, with Grace Jones hot on her heels in a wide-rimmed scarlet hat.

Farrah Fawcett dances during a party at Studio 54, February 6, 1978

Farrah Fawcett dancing at Studio 54 in 1978 wearing a draped ivory two-piece with a pair of gold strappy sandals.