The long and short of the best Australian swimsuits for men 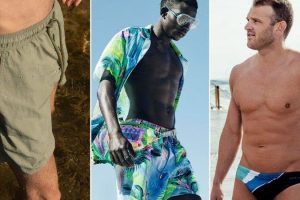 A quick survey of local beaches or public pools from behind mirrored aviator sunglasses reveals that most Australian men don’t agonise through the same annual ritual of updating their swimwear as many women. Translucent rugby shorts, Speedos from summers and waist sizes long forgotten and shapeless shorts that reach sandy knees demonstrate a level of body confidence that should be applauded and taste that barely surfaces in the wading pool.

Three Australian labels are doing their best to elevate men’s swimsuit game to levels that stretch beyond public acceptability to admiration. 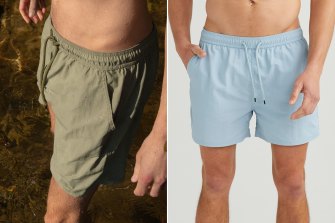 Men’s swimwear from Australian brand Jac + Jack. The shorts are their first foray into the ocean and pool.

The short of it

The Goldilocks principle applies to men’s swim shorts. Too long, and you’re ready for the basketball court instead of the beach. Too short and in a cold breeze vulnerable parts will feel colder than porridge.

“Length is important,” said Jac + Jack co-founder Jacqueline Hunt without the slightest wink nor nudge. “It’s a bit more of a grown-up concept. We wanted a shorter short that had great, classic, stylish appeal.”

For 17 years the homegrown lifestyle label has been making buttery soft linen T-shirts, breezy cotton shirts and fine knitwear in a muted palette just loud enough to register as refined. This season, is Jac + Jack’s first foray into men’s swimwear after some false starts.

“It’s a bit more of a grown-up concept. We wanted a shorter short that had great, classic, stylish appeal.”

“There have been years of research,” Hunt said. “We wanted to launch with recycled nylon but they ended up being very sheer. Dangerously sheer. In the end we found a Japanese nylon with a super soft sensibility and ease.”

The short shorts are big on detail, with mesh lining and a hidden key loop in the back pocket and subtle logo.

“It’s our maiden voyage and we thought we might sell 100 shorts. Let’s just say that more men were looking for this than we realised. It’s something that we will keep evolving with fit and cut, as well as making it sustainable, without being sheer.” 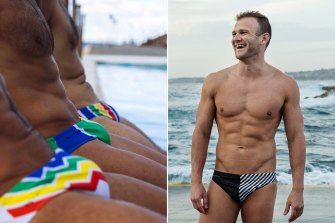 Men’s swimwear entrepreneur Jake Smith is grateful to rival Budgy Smuggler for reviving the popularity of Speedo-style briefs with their humorous prints of beer cans and rubber ducks but his four-year-old label Smithers has taken a serious design approach.

“For some customers classic brief styles are not a joke,” Smith said. “We aim for a level of sophistication with classic block colours and traditional prints, like stripes. It’s about being comfortable and confident that you look good.”

Smith expanded his skill set from banking to men’s swimwear four years ago and has seasonally refined the classic brief style, which is sexy without having to sacrifice modesty or resort to gimmicky details.

“When I started I was using myself as a fit model and I soon realised that it really didn’t work for the variety of body shapes out there. With some modifications, we now have a style that is less cheeky, intentionally.”

Smithers, currently only available online, is about to make the leap into the wholesale market after finding success in the American market.

“Customers there favour solid colours and tend to be more conservative. Men here are more adventurous and playful. Once again, thank you Budgy Smuggler for paving the way.” 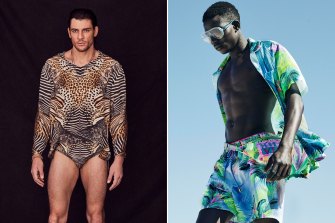 Kaftan queen Camilla Franks has extended her sartorial reign to men’s board shorts and swim briefs.

For a designer who has built an empire on covering women in kaftans, Camilla Franks doesn’t believe that men should hide their light behind a bushel or boring print. With a collection of board shorts and briefs, Camilla offers Australian men a local alternative to Versace which brings more than a touch of Miami Beach, Florida to Miami Beach, Queensland and beyond.

“Men want to feel the joy of wearing prints and being out and about,” Franks said.

Franks has always included styles for extroverted men in her collections but with the stronger style exchange between gendered styles in international fashion, they are being embraced with greater enthusiasm by male fans.

“We have more than doubled the breadth of our menswear offering due to incredible international demand for the category. Our matching shirts and board shorts have long been at the heart of our offering.”

“Our menswear range still carries the DNA of Camilla but has its own personality.” That personality also includes briefs, where the serious coverage comes from matching robes. “You’ll stand out in the crowd wherever you go.”