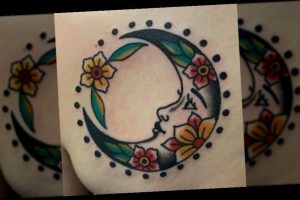 If you’re considering getting a tattoo, you may be attracted to some of the beautiful designs you’ve seen that involve a crescent moon — but what, exactly, does that image mean? It’s kind of important to figure that out before having anything permanently inked into your skin, right?

After all, you probably don’t want to be sending the message that you were the toughest person in a prison gang… umm, unless you do, in which case, the crescent moon is not the tattoo you’re looking for. It has a number of different meanings, but all of them are pretty peaceful in nature.

The crescent moon, depicting as it does the lunar orb at a phase in which much of it is hidden from view, is a symbol people often choose to represent their dark and mysterious side. The crescent moon is also viewed as a symbol of regeneration, and as such is often associated with motherhood and fertility, although the Tattoos Win blog mentions that some Native American and African tribes viewed the moon as being masculine and indicative of clarifying energy.

The crescent moon also has religious implications. Byrdie relates that in Greek and Roman mythology, the moon is associated with Diana, goddess of the hunt, and its crescent shape may echo the shape of the bow that was her preferred weapon. The Virgin Mary is sometimes depicted standing upon a crescent moon, so this symbol could be associated with Roman Catholicism as well (via the University of Dayton). And of course, the crescent moon and star symbol are universally associated with Islam.

One thing to keep in mind, when choosing a crescent moon tattoo, is whether you want the moon to be waxing (increasing), illuminated on the right side, or waning (decreasing), illuminated on the left (via the University of Maryland). According to Byrdie, the waxing moon is a symbol of growth and creativity, while the waning moon symbolizes release and reflection. Zenned Out explains that Wiccans associate the waxing moon with the Maiden phase of the Triple Goddess, representing youth and purity. The waning moon, on the other hand, is associated with the goddess in her crone phase, embodying wisdom and fulfillment.

There is one well-known instance, however, where a waning crescent is most assuredly not associated with old age (nor, especially, with wisdom) — one of the most beloved and enduring advertising icons over the past century-plus has been Miller High Life’s eternally young and lovely Girl in the Moon (via MillerCoors Behind the Beer). She, and no doubt the beverage she promotes, have inspired countless crescent moon tattoos.

So there you have it — the crescent moon can symbolize the divine feminine, or masculine, devotion to the deity of your choice, or even your love of non-snobby beer (or early 20th-century pinup girls). The moon is supposed to be mysterious, so it can mean whatever you like — as long as you’re sure it’s not something that’s going to lead to future regret, that is.