Home » Fashion » These are Jean Paul Gaultier’s most iconic creations 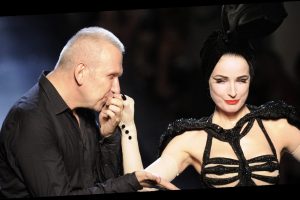 Many might know Jean Paul Gaultier as the designer who created that iconic hourglass perfume bottle. You know, the one kitted out in French Bretton stripes.

The cult perfume – Le Classique – was released in 1993 and was his first fragrance catering to women (he would later go on to drop Le Male two years later). It certainly caught the attention of many (no doubt, lots of us are still spritzing our bottle to this day), but in fact the designer is so much more than just a perfume bottle. Case in point: his cone bra dress, and respective corset, which debuted in 1984. The garments quickly amassed a slew of fans and served as archetypes for the underwear-as-outerwear trend. Madonna swiftly maintained an ongoing relationship with the cult silhouette too, serving as a pinnacle sartorial choice during her Blonde Ambition tour.

Last week the renowned designer announced his last couture show – taking place on the evening of 22 January – would be his last. The shock announcement came via Twitter as the designer spoke on the phone, posing languidly against various items including a mannequin reminiscent of his trademark sculpted perfume bottle.

He said: “This show celebrating 50 years of my career will also be my last. But rest assured Haute Couture will continue with a new concept.” Undoubtedly, tonight will not only be an incredibly emotional farewell for the designer, but it will indeed spark many conversations surrounding the French native’s initial venture into couture, as his vivaciousness and flair for embedding a sense of playfulness to the prestigious fashion week schedule will be sorely missed.

Gaultier presented his first couture show over two decades ago in 1997: provocative, daring and darn right fashion-forward was the evident theme. The show was awash with models caked in exaggerated makeup, draped in cutting, crisp two-piece suiting and utilised sheer materials in a way that challenged and conjured excitement within the fashion landscape. Gender constructs were dismantled as male models sauntered down the catwalk in halter necks, extremely beaded co-ords and jelly shoes. Heavily dubbed as the ‘Enfant Terrible of Fashion’, due to his penchant for creating thought-provoking, sensual and, most importantly, fun pieces that are somewhat unmatched in the industry. As a matter of fact, his signature tattoo print tops are still a hot commodity on resale sites like Depop and eBay.

Condensing a couture career spanning five decades will undoubtedly be a privilege to witness and while we’ll be waiting with bated breath to see him unveil his final offering, revelling in his craftsmanship and most memorable moments to-date is certainly a good way to spend our time.

From delicately spun sheer dresses to whimsical nautical headgear, scroll ahead to see a few of the designer’s most iconic creations.

Injecting a sense of playfulness to the otherwise restrictive and Victoriana staple, this emblazoned iteration paired with a double draped satin bias skirt would quickly become a blueprint.

2) The corset gets flipped on its head

Yet another corset sample would make an appearance on the catwalk, much to the joy of his admirers. This time it sported fringe and cut out detailing, intertwined with sheer material, married up with tailored trousers. Inspiration. For. Days.

3) Things got a little more shiny and nautical

A sequinned striped top paired with a vivacious sheer skirt stood out in his 2003 couture collection.

Taking on a more religious feel, his 2007 designs were evidently inspired by the Catholic church and the delicately crafted interior.

5) Undergarments prove to be supreme (yet again)

Dita Von Teese made an appearance during his fall 2010 couture collection sporting a breathtaking number that made us hastily pledge our allegiance to the underwear-as-outerwear situation.

END_OF_DOCUMENT_TOKEN_TO_BE_REPLACED

END_OF_DOCUMENT_TOKEN_TO_BE_REPLACED
We and our partners use cookies on this site to improve our service, perform analytics, personalize advertising, measure advertising performance, and remember website preferences.Ok