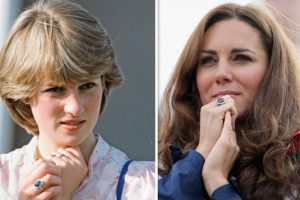 Princess Diana died in 1997, and she left much of her wealth and belongings to her two sons, Prince William and Prince Harry. Now both William and Harry are married to Kate, Duchess of Cambridge and Meghan, Duchess of Sussex respectively, the royal women are often spotted wearing Diana’s jewellery in tribute to their late mother-in-law. Here are three of Diana’s jewellery items which now belong to Kate.

Perhaps the most iconic piece of jewellery Kate inherited from Princess Diana was her sapphire engagement ring.

Prince William proposed to Kate back in 2010 while the pair were visiting Kenya.

The ring features a 12-carat Ceylon sapphire that is surrounded by 14 solitaire diamonds.

William said at the time he proposed with the ring to make sure his mother was part of the couple’s celebrations.

Now the bracelet belongs to Kate, Duchess of Cambridge, with the Duchess spotted wearing the bracelet during a royal tour of Germany in 2017.

Alexandra Michell, Gemologist at Prestige Pawnbrokers of Channel 4’s Posh Pawn, told Express.co.uk: “This contemporary piece was designed by Nigel Milne in 1988 and showcased as part of the Birthright collection in his catalogue.

“The advertised price for it was £2,200 (close to £6,000 today), with proceeds of sales going to the charity of the same name, Birthright.

“It was first worn by Princess Diana at the Birthright Ball in 1989, as she was the charity’s patron.”

Kate has worn the bracelet on several occasions as a senior royal, and it is valued at a significant price.

Ms Michell added: “This piece would do well at auction, and being a piece that is versatile, worn day or night, would sell for over £30,000.”

Princess Diana frequently wore the Collingwood pearl earrings while out at royal events, and Kate has also donned the earrings in recent years.

Ms Michell said: “A wedding gift to Princess Diana, these pearl earrings were given to her a month before her wedding day by Collingwood Jewellers (family jewellers of the Spencer Family), and worn as part of her sending-off outfit.

“She wore them over a dozen times either dressed up or down, and [the earrings] have been worn as many times by Kate to official functions.

“A double diamond drop precedes the open-worked diamond setting from with large pear-shaped pearls are suspended.

“With their Edwardian style, they work perfectly with the Lovers Knot Tiara, and have been worn together many times.

“At auction, these beautiful earrings would sell for over £50,000.”

Although the Cambridge Lover’s Knot Tiara belongs to the Queen, Diana was pictured wearing the tiara on several occasions.