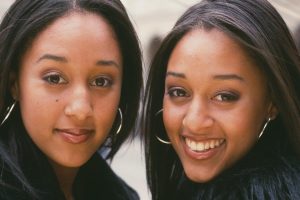 For most Black girls, making the decision to go natural these days is easy, but the process of actually getting there is a different story — even when you're a celebrity. And Tia Mowry knows the struggle all too well.

After filming the final two seasons of the hit series Sister Sister in the late '90s, Mowry had lost her natural curl pattern due to heat damage caused by flat ironing her hair every day on set. Like many of us, her journey back to natural hair didn't start until a cultural shift towards embracing Black beauty began to gain traction. Mowry admits there were times during her transition where trying to manage two textures was difficult, but she found hair accessories and styles to make the process more seamless.

After a few months of growing out her hair, she was ready for the big chop, something the actress says she had never done before, but found to be very satisfying.

"You start to have this love affair with your natural self," Mowry says. "I was nurturing my hair, I started to put oils in it — natural oils from coconut oil, jojoba oil, putting in the leave-in conditioners, and just really monitoring what I'm putting on my hair and my scalp to help it grow."

"Seeing it grow and grow and grow it's very liberating," the Family Reunion star continues. "It's really just self-love to be able to embrace that part of me."

As someone who has transitioned herself and loves her thick, type 4 curls, I couldn't agree more.

This is All Natural. From the kinkiest coils to loose waves, we're celebrating natural hair in its many forms by sharing expert tips for styling, maintenance, and haircare.