Home » Fashion » Two of Us: How pyjama king Peter Alexander and his mum built an empire from their kitchen table

Two of Us: How pyjama king Peter Alexander and his mum built an empire from their kitchen table

Pyjama king Peter Alexander, 55, gave his mother, Julette, 81, her first paid job when she was 50, and together they built a thriving company from their kitchen table. She has been his lifelong champion and protector. 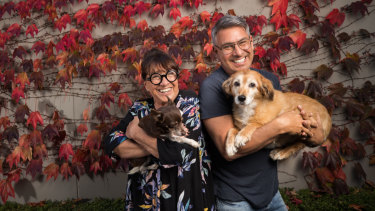 PETER: I was born in South Africa and moved to Melbourne as a baby with my two sisters and my parents, who were anti-apartheid. We lived in Kew; Mum stayed at home and Dad was a real estate agent. Mum wasn't one of those Brady Bunch housewives, though; we had to get our own breakfast before school and she slept. I think Mum had postnatal depression before it was a thing: at 26 she had three kids under four, in a new country with no family or friends. She stayed in bed a lot and my sisters and I fended for ourselves, but there was plenty of love. She's always been a happy person.

Mum lied to get me into school early – she wanted me out of the house. I went from school to school because I had learning disabilities, and I had a terrible stutter. I was diagnosed with dyslexia when I was eight. People thought it was just another form of saying "stupid". Mum found out that [Geelong Grammar's primary-school campus in Toorak] Glamorgan had remedial classes, so she forced me to go there in year 3. School was telling me, "You're not good enough," and Mum was saying, "You are. You're just not fitting into the system." She was always telling me how special I was.

I started my pyjama business at 24. About six months in, Dad was diagnosed with lung cancer. He said, "Your mum's going to need something to keep her mind off things, so could you employ her?" He died three months later. It was just Mum and me, working 80 hours a week. She did everything from accounts to packing orders. People thought we were this big company, so I'd answer the phone as Jim from the stockroom and Mum would be Janelle from accounts, but we were just two idiots in a lounge room.

Mum likes being the mother of Peter Alexander. No matter where we are, she'll always tell someone, and I'm cringing in the background. My sisters have had to put up with me being the favourite, even though they're wonderful to Mum as well. Whenever it's a rainy day, they say, "Could you just bend over so the sun can shine out?"

She thinks everybody should have a gay son because they look after you and there's no bitch daughter-in-law stealing your son's time away. I've been single for the past decade. I've lived with Tony for 15 years but we're not romantically involved – we're like The Golden Girls, we just live together as best friends. The only time Mum and I have fought is if she hasn't got on with a partner. She always wins!

My sisters have had to put up with me being the favourite … They say, 'Could you just bend over so the sun can shine out?’

What I get out of the relationship with her is a sense of security. It scares me because when she's gone, what's life going to be like without my number-one fan? She's looked after me and loved me and now the tables have turned. It's the way it should be.

When she arrived today, she told me she had good news and bad news: “I remembered to put my panties on, but I forgot my bra.” I’m probably a little crazy like my mum, but I do remember to wear my underpants.

JULETTE: I fell pregnant with Peter two months after I had my second child. I was going to have an abortion, but I went to somebody who did that sort of thing and he said, "I'm not touching this – it's too dangerous because you've just had a baby." Peter was the best mistake I ever made.

I bonded with him immediately, and my husband, Joe, was happy to have a son. One day, Joe jumped out of his seat watching football and shouted at someone on the field, "You bloody poofter!" I said, "We won't be saying that any more" – Peter was maybe a year old and I just had a feeling he was gay. I remember Joe throwing him a ball; Peter just looked at it and walked the other way.

Peter was a difficult child. He stuttered, he couldn't spell, he didn't read. So I took him to a child therapist. He'd come out crying and say, "She made me eat poo," because he didn't want to go. I used to take him to school and had to drive away with him hanging on to the fender, crying, "Please, Mummy!" He was at a Jewish school and the headmaster said, "All these Jewish mothers, when their children are stupid, they blame it on something else." That was the day I said, "Sorry, we won't be seeing you tomorrow." I was never a wonderful person, but I did love my children.

Peter came out when he was 19. Joe and I were in bed when Peter gave Joe a book – and a photograph of Peter kissing a boy fell out of it. Joe was supportive; it didn't worry me at all.

I worked with Peter as 2IC of the company for the first 11 years [he sold to the Just Group in 2000 and remains creative director of the brand] and it was so exciting; I'd done nothing in my life except cooking. At one point, my niece kicked the computer plug and everything was gone – we didn't know the customers' names, addresses or anything. We looked at each other and laughed. I said to Peter, "Go away and get over it and I'll sort out everything."

Peter hates going out. He just loves having us all there at the table laughing. He likes to come home to his dogs [Midge, pictured left, and Butch]. He gives tons of money to the RSPCA.

Peter means everything to me. He takes my daughters and me every year for a trip somewhere – Fiji, Bali, Africa – and we never take the husbands. He looks after me like I'm a queen. He orders or brings me food every single day. Why would I fight with him? He's perfect!

To read more from Good Weekend magazine, visit our page at The Sydney Morning Herald, The Age and Brisbane Times.