Home » Fashion » ‘We didn’t want it to be too elegant’: The tennis star bringing Hugo Boss to the court

‘We didn’t want it to be too elegant’: The tennis star bringing Hugo Boss to the court

On Friday, the television series Break Point launched on Netflix and my scheduled interview with Matteo Berrettini vanished from the Italian tennis champion’s schedule faster than his opening serve. Three days later he phones from a treatment table, still processing the increased attention he has received from the documentary, while preparing for his first round in the Australian Open against Andy Murray.

“Obviously, it wasn’t an easy choice,” Berrettini, 26, says of participating in the series. “We weren’t sure about how much we could say but once we decided to do it, we went full-on, or it doesn’t make sense. We had to show who we are, on and off court.” 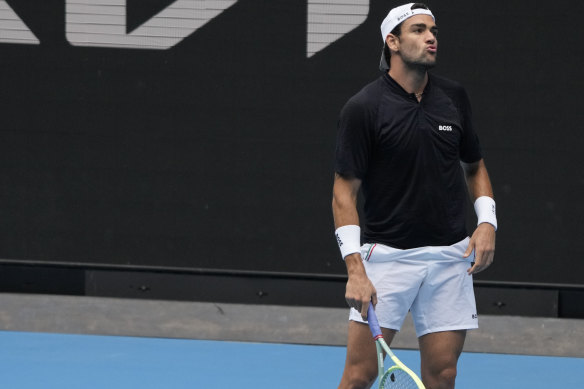 Matteo Berrettini in his Boss uniform during a practice session against Russia’s Andrey Rublev ahead of the Australian Open, on Friday, Jan. 13, 2023Credit:AP

The series is a behind-the-scenes look at top-level tennis players and follows Berrettini’s journey to the semifinals at last year’s Australian Open, his psychological challenges, along with tense encounters with his then-girlfriend, Australian player Ajla Tomljanovic.

“Some moments are not easy to share… when you lose, when you’re injured,” he says.

“Hopefully, it shows kids dreaming about tennis and coming from a normal family, that you can make it.”

The experience also gave Berrettini the chance to witness Australian style at the red carpet premiere for the series in Melbourne, attended by Tomljanovic, Nick Kyrgios, Frances Tiafoe and Taylor Fritz, away from the sea of face paint and T-shirts in arenas.

“The red carpet here is not that formal,” he says. “It’s not all high heels like in Italy. I like the summer vibes and the surfer feel.” 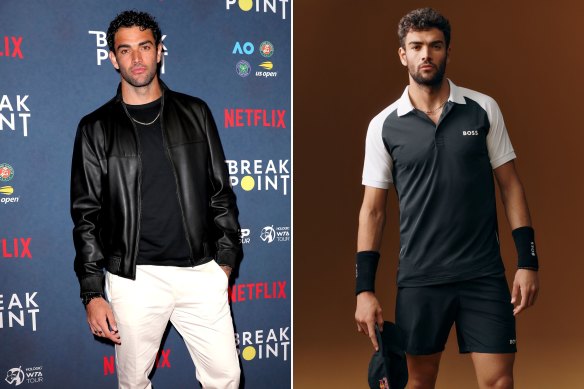 Strike a pose. Italian tennis star Matteo Berrettini at the Melbourne premiere of the Netflix series ‘Break Point’ and modelling his capsule collection with Boss.Credit:Getty, Supplied

As an ambassador and model, standing 1.96 m tall, for German fashion giant Hugo Boss, Berrettini’s opinion carries more weight than many of his dishevelled opponents. He has collaborated with the casual Boss range on a capsule collection of stretch-polo shirts, simple hoodies, caps and shorts, although an Italian turning to Germany for fashion is as shocking as ordering Cacio e Pepe in Munich.

“In Boss there is an Italian influence,” Berrettini says. “Marco Falcioni is from Rome and when he became the head of design I was super happy. We share the same language which makes working on style easier.”

The collaboration’s classic approach mirrors Berrettini’s on-court style, borrowing more from the restrained look of Rod Laver in the sixties and Adriano Panatta in the seventies, than Andre Agassi’s eighties flamboyance and Rafael Nadal’s penchant for pops of colour.

“Mostly I think about myself,” Berrettini says, when asked about the aesthetic approach of fellow players. “It’s a classy sport, but there’s always room for improvement.”

“We don’t want it to be too elegant and return to long pants.”

Unlike Nadal’s past campaigns for Tommy Hilfiger and Emporio Armani, Novak Djokovic’s appearances for Lacoste and Roger Federer in Uniqlo advertisements, Berrettini looks at ease in front of the camera (though not quite as relaxed as top-rated player Carlos Alcaraz in his underpants for Calvin Klein).

“I like to dress up,” Berrettini says. “This is a great opportunity for me, working with an international brand. It’s also surprising when I walk through an airport and see the pictures of me. It’s so special.”

Despite the occasional verbal wince on the treatment table, Berrettini seems to be coping with the recent increase in attention from Break Point and Boss just fine.