Home » Fashion » When a Social Butterfly Meets a Homebody

When a Social Butterfly Meets a Homebody 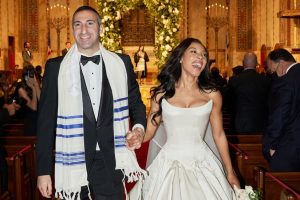 There was a time in Arielle Patrick’s life when her refrigerator was nearly empty and her social calender completely full.

“That’s what my life was like when I was single,” said Ms. Patrick, 32, who works in Manhattan as the chief communications officer of Ariel Investments, an asset management firm based in Chicago. “I was always working or at a party or some big event, always running with the crowd.”

Then along came Aaron Goldstein, 39, a self-described homebody who is an owner of Macellum Capital Management, a Manhattan-based hedge fund.

“Arielle is a lot more social than I am,” said Mr. Goldstein, who graduated from Trinity College in Hartford, Conn. “She helps me explore the world a little more, and she is also significantly more positive about everything compared to me.”

Ms. Patrick and Mr. Goldstein met through a mutual friend in March 2019. Ms. Patrick, who was then living on Manhattan’s Upper East Side, was convinced by their mutual friend to go with her to what she referred to as “a party in Brooklyn.”

“I looked horrible that day,” Ms. Patrick said. “I was just having a bad day all the way around.”

Her day got better when she and their mutual friend arrived in Brooklyn, and walked through the door of an apartment where a party should have been happening. But all they saw was Mr. Goldstein sitting there, in the company of a friend, not exactly Ms. Patrick’s idea of a party.

As it turned out, their mutual friend had staged the supposed party to get Ms. Patrick and Mr. Goldstein to meet.

She was immediately smitten with Mr. Goldstein. “He exuded confidence,” Ms. Patrick said. “He looked and sounded like a man who knew where he was going in life.”

Mr. Goldstein was equally impressed. “I admired her ambition, family values and passion for life,” he said. “From the moment we met I just kind of knew I would marry her.”

They talked the entire night away, and Ms. Patrick said that after their initial meeting at the party that wasn’t, Mr. Goldstein asked her out. They saw each other “every single night after that, and we just kept seeing each other and Aaron never discussed whether we were boyfriend and girlfriend or an exclusive couple. It was more about what was not said than what was said.”

No matter how they defined their status, the couple “got serious pretty quickly,” Ms. Patrick said, adding that Mr. Goldstein “was the first man I dated that I fully trusted, and I always felt safest when I was with him.”

Ms. Patrick said that one of the most important things Mr. Goldstein has impressed upon her is that “the most significant moments in life are the ones that happen when no one is watching.”

“Since we met my social life has quieted down significantly,” she said. “These days, I’m happiest during a good meal,” said Ms. Patrick, who graduated from Princeton and sits on the national advisory board for Yellowstone National Park’s foundation, among others.

“I still have my circle of friends,” she added. “It’s just that with Aaron, I have a deeper appreciation for spending quiet night’s at home than I ever did before.”

And this includes the night they got engaged, March 1, 2020, exactly one year after they met.

“We were already in our pajamas when Aaron held out a small box, and we just kind of looked at each other before he said, ‘Well, do you want to open it,’” Ms. Patrick recalled. “I just said, “Oh my God, yes, yes!”

They were married Aug. 7 at Temple Emanu-El in Manhattan before 270 guests, most of whom were vaccinated. Rabbi Sara Sapadin officiated.

A few hours before the bride walked down the aisle, she was asked for one word to describe her relationship with the groom and quickly said “private.”