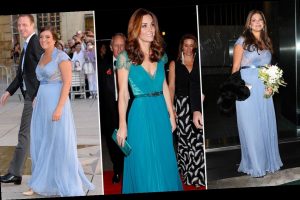 They say imitation is the sincerest form of flattery, right? Well, these royal ladies certainly think highly of each other's style, since they've doubled up by wearing exactly the same outfits. It's unsurprising, really, since they attend similar-style engagements and stick to certain smart fashion rules – and we can't blame them for falling for these gorgeous looks! Scroll down to see all the times your favourite royals have twinned with each other…

The Duchess of Cambridge and Princess Sofia of Spain

Kate certainly stood out from the crowd in this bold red Carolina Herrera coat during a royal tour of Canada in September 2016. Just one month later, Princess Sofia attended Spain's National Day military parade wearing the children's version of the same coat – she even added a red strap to her shoes to match.

Princess Beatrice and the Countess of Wessex

Fans noticed there was something familiar about Princess Beatrice's Emilia Wickstead dress at 2019's Trooping the Colour, and that's because the Countess of Wessex wore it to Royal Ascot in 2018! Princess Mette-Marit of Norway has also been spotted in the frock before.

We can see why Kate loved this pretty Erdem dress floral maxi dress, which she wore to formally open her garden at the Chelsea Flower Show in May 2019. It seems she'd first spotted it on the Duchess of Kent, who first wore the designer frock to Prince Harry and Meghan's royal wedding in 2018! It's the Canadian brand's 'Shebah' gown, and is worth £2602 – Princess Eugenie also owns a similar version in a shorter length.

The Duchess of Cambridge and Princess Sofia of Sweden

Royal fans were surprised to see Princess Sofia wearing a Self-Portrait gown – that Kate first wore in 2016 – at a state banquet in June 2019. The perfect choice for a royal occasion, we reckon! Sofia chose to have the leg-revealing split removed for the dinner, which was held in honour of South Korea's presidential couple at the Royal Palace in Stockholm, Sweden.

The Duchess of Sussex and Queen Letizia of Spain

Many royals share the same go-to designers, and both Letizia and Meghan are particularly fond of Stella McCartney. The pair have both worn this caped dress in the past – the Spanish monarch to the 2018 National Sports Awards, and the Duchess to the Queen's 92nd birthday concert later the same year.

MORE: Why Princess Anne is our unexpected style icon! Her most memorable outfits over the years

The Duchess of Sussex and Queen Letizia

Meghan twinned again with the Spanish monarch when they both opted to wear this chic red leather Hugo Boss pencil skirt – and on the same day no less. Meghan was spotted in hers as she attended a roundtable discussion for the One Young World summit in October 2019, while Queen Letizia wore hers for a meeting in Seoul.

Queen Maxima of the Netherlands and Princess Charlene of Monaco

It's another win for Stella McCartney! Queen Maxima stepped out in this stunning white gown for a gala dinner in Amsterdam in April 2019, but it was Princess Charlene who wore it first – for the Laureus World Sports Awards in February 2018.

The Duchess of Cambridge and Princess Mette-Marit of Norway

Both Duchess Kate and the Norwegian Princess have been spotted in this sparkly Erdem midi dress – we can hardly blame them, it's beautiful! Kate wore it for a reception to mark the launch of the UK-India Year of Culture in February 2017, while Princess Mette-Marit stepped out in it in November 2016.

Crown Princess Victoria of Sweden and Queen Maxima of the Netherlands

Victoria chose this pretty lace Elie Saab dress for the christening of Prince Alexander in September 2016, and later Queen Maxima also wore it during a trip to Portugal in October 2017.

The Duchess of Cambridge and Princess Madeleine of Sweden…

Both Mary and Kate are fans of this fit and flare dress by Emilia Wickstead. Royal watchers often note the similarities between these two – we reckon their elegant styling is very similar! Kate also owns this dress in a pretty lilac shade.

The late Princess was known to regularly loan her clothes to her close friend Sarah! Diana chose to wear this maroon drop-hem dress by Anouska Hempel on two occasions – pictured here in 1986 during a visit to the St John and St Elizabeth Hospital in London. It was later seen on the Duchess of York at Royal Ascot in 1988 – though it could be a maternity version of the same dress, since Sarah was pregnant with Princess Beatrice at the time.

The Duchess of Cambridge and Princess Beatrice

While not exactly the same, Kate and Beatrice wore near-identical emerald green dresses from The Vampire's Wife. Beatrice's frock featured more tiered ruffle layers than Kate's, but at a quick glance, it's tricky to spot the difference. Kate looked stunning in her dress for a visit to Guinness Storehouse’s Gravity Bar in Dublin during the first day of her Ireland visit in March. While Beatrice rocked her number to The Dior Sessions book launch afterparty in October 2019.