Where is SAS: Who Dares Wins filmed? Locations in Morocco's Atlas Mountains unveiled 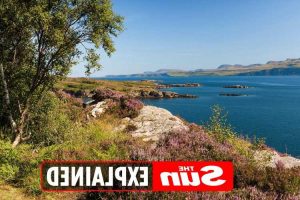 The series sees 21 ordinary Brits to their breaking point as they take on a series of gruelling challenges.

The end comes as ex-SAS: Who Dares Wins star Ant Middleton was reportedly heading to Australia to film his own spin-off of the show.

The Special Boat Services veteran who was sacked back in March has been in talks with a rival channel about creating a new SAS-themed series.

Where is SAS: Who Dares Wins filmed?

This series of SAS: Who Dares Wins is filmed on the remote Scottish island of Raasay.

It is located between the Isle of Skye and the mainland of Scotland and the varied terrain ranges from 14 miles (23 kilometres) north to south and 3 miles (5 kilometres) east to west (at its widest).

The punishing terrain will push the contestants to their limits and new instructor Melvyn Downes said: "There's something special about Scotland and it brought back memories of my SAS training.

"Forget sunny days, you can always count on Scotland to give you all seasons in one day. And you can’t beat the excellent terrain, as it’s great for missions, which is why it worked so well for the series."

Where is the island of Raasay and can I visit it?'

Despite being a remote Hebridean island, getting to Raasay is easier than you may think.

Ferry from the Isle of Skye is a popular way to reach Raasay.

Step aboard the CalMac ferry in Sconser on the east coast of the Isle of Skye and enjoy the scenic 25-minute sailing over to Raasay.

You can also travel by car to Raasay from anywhere in the UK. Popular cities to set off from include Inverness, Edinburgh, or Glasgow.

Visitors can catch a train to Inverness from Edinburgh or Glasgow and travel through the picturesque Scottish countryside to the Highland capital.

Those travelling from London can join the above journey after travelling first to Edinburgh or Glasgow.

SAS: Who Dares Wins continues on Channel 4 on Sundays at 9pm