Home » Fashion » Woah! Justin Bieber Covered Up All His Tattoos for the 'Anyone' Music Video

Woah! Justin Bieber Covered Up All His Tattoos for the 'Anyone' Music Video 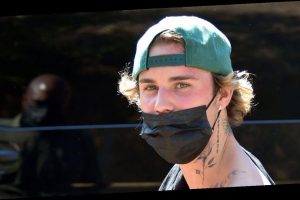 Goodbye tattoos! Well, at least temporarily. Justin Bieber covered up his extensive body art for his “Anyone” music video — and the transformation is wild.

All of the Most Artistic Graphic Celebrity Tattoos

On Friday, January 1, the 26-year-old singer took to Instagram to share a video of himself sitting in a makeup chair while a team of makeup artists work to conceal and airbrush away his tattoos. “No tats for the #Anyonevideo,” he captioned the time lapse video.

Fans found the quick clip quite mesmerizing to watch. “THAT WAS SICK TO WATTTTCH,” commented one user.

The music video, which dropped on New Year’s Eve, features a tattoo-less Bieber as he trains for a boxing match with the support of his loved one, played by Zoey Deutch.

The Canadian native didn’t mention how long it took to cover up his ink, though with his impressive — and growing — collection, we can only imagine that it was quite a process. After all, Pete Davidson recently revealed that he’s professional removing all his tattoos because of how long it takes for him to get them covered up in a makeup chair.

On December 6, film critic Mike McGranaghan tweeted a screengrab from The King of Staten Island virtual Q&A, reporting that the Saturday Night Live star, 27, is officially in the process of lasering off his tats.

“Just attended a virtual Q&A with Judd Apatow and the cast of THE KING OF STATEN ISLAND,” McGranaghan wrote. “And here’s a scoop: Pete Davidson is in the process of getting all his tattoos removed!”

When one Twitter user responded in disbelief, McGranaghan clarified, “No, it’s real. He even showed his hand, which is already done. He said it takes 3-4 hours in the makeup chair to cover them, so he figured ‘it would be easier to get them burned off.’”

With over 100 tattoos according to Body Art Guru, we totally get that. But nevertheless, Davidson’s fans were not happy about the news. “I won’t stand for this,” one person tweeted. “Learning that Pete Davidson is removing ALL his tattoos might give me the same feelings a divorce would give me,” wrote another.