This can leave our partners mystified by the weird and wonderful things women use, from eyelash curlers to spandex.

And another object of mystery appears to be nipple covers.

A tweet has gone viral of a woman sharing a photo of flesh-coloured daisy pasties, asking men if they could identify what they were.

Twitter user @cxffeinated said: “Since men know everything. What are these?”

And the answers are hilarious.

From mash potato to frog spawn, it seems some men really are baffled by this fashion accessory.

This bloke said: “Do you use them to make unsteady tables steady.” 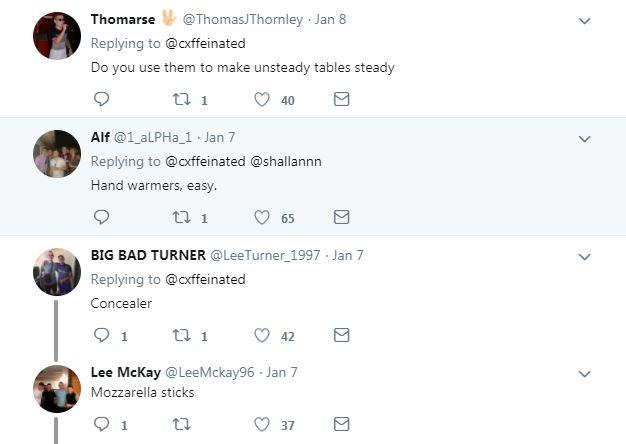 One woman said: “According to my boyfriend: ‘It’s difficult to tell without some kind of scale… Are those frog eggs?’”

Another food-related answer was ‘custard tarts’, and this man said ‘raw chicken’.

A good guess, this man said: “Wax melts, our lass uses them all the time.

“’Caribbean Peach’ flavour by the looks of them.”

This possibly could work, this man said: “Puncture repair kits.”

Others were still in the dark, but had learned if you throw them at surfaces they stick.

In other fashion news, a mum parodied sexy bikini advert to show how ridiculously skimpy the pants are.

And we recently revealed the company was accused of ‘Photoshopping’ a model’s crotch in shot of skimpy lace bodysuit.

END_OF_DOCUMENT_TOKEN_TO_BE_REPLACED

END_OF_DOCUMENT_TOKEN_TO_BE_REPLACED
We and our partners use cookies on this site to improve our service, perform analytics, personalize advertising, measure advertising performance, and remember website preferences.Ok