Home » Food & Drink » 8 Whole Grains You Should Definitely Be Eating

8 Whole Grains You Should Definitely Be Eating 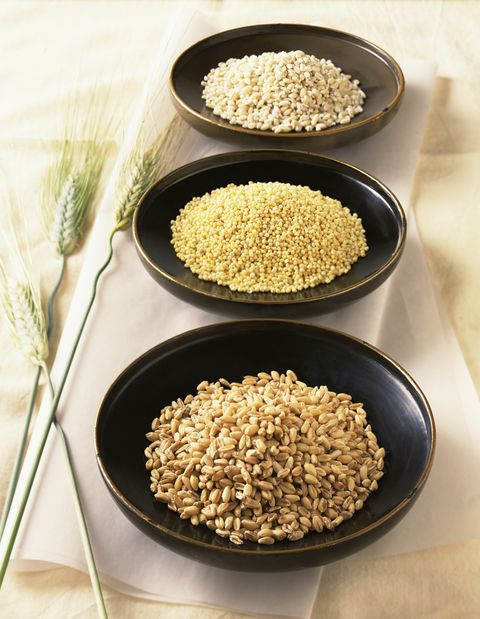 A heaping pile of protein with a little fat on the side. That about sums up the diet of the average American male.

Now, if you’re reading this, you’re probably more health-conscious than the average dude. But all the recent hype surrounding ketogenic diets and Paleo plans may have steered you toward a meat-and-fat-centric menu that neglects a dietary component most health researchers agree is a MUST: fiber from whole grains.

“If we look at the amount of evidence for benefit, the strongest associations for the prevention of numerous chronic diseases and type 2 diabetes is for fiber from whole grains,” says Wendy Dahl, Ph.D., an associate professor of food science and human nutrition at the University of Florida.

What evidence is she referring to? A large 2016 review in BMJ linked the consumption of whole grains to lower risks of heart disease, cancer, diabetes, and mortality. The year before, a Harvard School of Public Health team published the results of two studies that examined the diets and lifestyles of more than 100,000 American men and women. After controlling for other dietary and lifestyle factors, they found higher whole grain consumption was linked with a significantly lower risk for death and heart disease.

Unfortunately, not many men are hitting their daily fiber targets. The U.S. National Academy of Medicine recommends that guys between the ages of 14 and 50 eat 38 grams of fiber a day. But the average American only eats about 15 grams.

Dahl says the popularity of gluten-free and anti-grain diets is partly to blame for our paltry fiber intakes. People who adopt these diets without a compelling medical reason (like celiac disease) are cutting off one of the largest and healthiest sources of fiber in their diets, which is whole grains, she says.

“Instead, everyone’s eating more protein, which the average American already consumes enough of already,” she says.

Other experts share her take. The elimination of dietary fiber and the promotion of very low carbohydrate diets “is a concern,” says Walter Willett, M.D., a professor of epidemiology and nutrition at Harvard. Willett points out that there are no long-term studies on the health or mortality effects of low-carb plans that eliminate whole grains and other traditional fiber sources.

“It is true that the large amounts of refined starch and sugar in the U.S. diet are harmful,” he adds. But lumping in fiber-packed whole grains with carb-heavy snack and junk foods is a mistake.

What are the health benefits of fiber from whole grains?

It helps slow digestion, which prevents the kind of blood sugar swings that are associated with metabolic disorders like diabetes and obesity, Willett says. Also, “many minerals, vitamins, and phytochemicals travel along with the fiber from grains,” he adds.

Fiber from whole grains is also very filling, and so it may help curb overeating and combat obesity, Dahl says. It also seems to promote lower levels of GI inflammation, and may provide important sustenance to healthy species of gut microorganisms, suggests a 2018 study from Denmark.

What whole grain foods should you be eating?

So-called “sprouted grain” breads are also a good source, Dahl says. Ditto products containing whole grain rye or barley. Dahl says these can be hard to find in the U.S. (they’re more popular overseas), but snag them if you can find them.

Whole grain pasta is another option. “There’s an anti-pasta movement out there, but whole grain pasta provides a lot of satiety, and it has a very low blood sugar response,” she says.

Popcorn is another healthy whole grain food—one rich in antioxidants and phytochemicals. (Get an air popper and pop your own raw kernels; the pre-bagged or microwave varieties tend to be loaded with unhealthy additives.)

At the same time, be wary of some packaged products labeled “whole wheat” or “whole grain.” Not all of these are healthy sources of whole grains. Check the nutrition facts and look at the ratio of total carbohydrates to fiber. You want that ratio to be 10:1 or lower, according to a 2013 study from Harvard. (For example, if one serving of a product contained 30g total carbs, you’d want its dietary fiber content to be 3g or higher.)

“The message on fiber from whole grains is all positive,” Dahl says. “There’s just a huge spectrum of health benefits.”