Richard James Adair, Jr., had always been heavy. Now a 42 year-old software architect from Red Lion, Pennsylvania, he remembers going to Sears to shop for school clothes, heading straight to the husky section. Without any conscious effort to change his diet—“I would eat anything and everything,” he says—and a profession that had him sitting at a desk, over the years his weight kept creeping up.

He crested 40 at over 300 pounds; working from home helped him gain more. “I started to get to the point that I was taking a break to catch my breath going upstairs for the night,” he says. “I couldn’t even now the lawn without multiple breaks.”

It took his wife to inspire him—after limited success with diets, she tried keto and found it worked. Adair, then at 344 pounds, began dieting on New Year’s Day, 2019. He no longer had his gallbladder, so he couldn‘t go full keto, but he cut out as many carbs as he could while still eating as much as he wanted. (His current goal is 20 carbs a day, on a diet of 2,000 calories daily.)

After about five months, he was used to his diet. He started counting his steps, starting small with a goal of 4000 a day. He upped that number until he was hitting 10,000 daily. That helped him get used to exercise; now he’s transitioned to Calories In, Calories Out (CICO) and added cycling to work and running to his activities.

In just ten months, he’s lost 102 pounds—from a high of 344, he’s down to 242. He’d like to drop another 23 by the end of the year, but he says people who haven’t seen him in a while don’t even recognize him, and his parents are amazed at the change. “My quality of life has never been better,” he says. “I need to work to get winded now. My kids have trouble keeping up with me.”

He credits his wife with believing he could change, and giving him extra motivation when he needed it. Her success—“She has accomplished just as much as me, if not more,” he says—showed him that change was possible. “I spent years feeling like I was so far behind that it would be easier to just ride it out until the end,” he says. His wife showed him a different path. 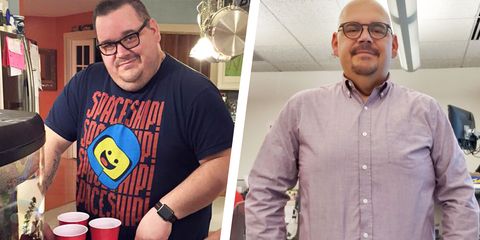 He’s excited now to feel he’s on the way to a healthy weight for the first time in his life. He shared his story on Reddit, eager to inspire anyone who, like him, might feel like they don’t have any options to change. “I would say to anyone that feels they can’t begin this journey to just try,” he says. “Pick something small and change it. Then pick something else and change it. Those small things add up and before you know it you have a new normal. A healthy normal.”

END_OF_DOCUMENT_TOKEN_TO_BE_REPLACED

END_OF_DOCUMENT_TOKEN_TO_BE_REPLACED
We and our partners use cookies on this site to improve our service, perform analytics, personalize advertising, measure advertising performance, and remember website preferences.Ok