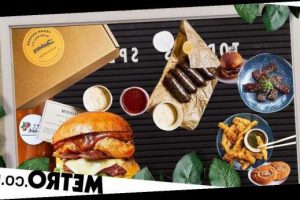 It’s that time of year again – the time for thousands of Brits lay down their forks and embark on a healthier, greener lifestyle journey by taking part in Veganuary.

Cutting animal products out completely is no mean feat, but luckily, this year’s effort just got a little bit easier.

Some of Britain’s tastiest restaurants have hopped on the herbivore bandwagon, and have rustled up a whole range of plant-based takeaways, DIY kits and cupboard essentials, all available for delivery.

So whether you’re a long-standing vegan preacher or just trying to introduce some meat-free meals, this list will have something to tempt you.

Drinks include a bottle of Espresso Medatini and two cans of Meda functional CBD, and dessert is Vida Bakery ready-to-bake cookies.

After the success of its at-home bacon naan roll kit, Dishoom has launched a vegan sausage version. The sausages – a mix of fermented vegetables with spices – arrive with dough balls, tomato-chilli jam, coriander and vegan cream cheese, and loose-leaf Darjeeling tea, chai spices and ginger for brewing masala chai.

For every kit sold, Dishoom donates a meal to Magic Breakfast, its charity partner providing free meals to schoolchildren in need.

Wagamama has pledged that 50 per cent of its main menu will be meat-free by the end of 2021.

It starts the year with a host of new vegan dishes, including chilli ‘squid’ (made with shichimi-coated lightly battered king oyster mushrooms), and no-duck donburi (shredded seitan and shiitake mushrooms coated in cherry hoisin sauce).

Available for delivery and click & collect nationwide (some dishes dine-in only) from Wagamama.

Missing sprouts? The Sauce Shop’s Brussels Sprout Ketchup has been described as tasting like ‘braised cabbage in a bottle’. Are you brave enough to give it a go?

Treat yourself to a ‘Tribute to Jamaica’ burger from Honest Burgers in collaboration with Jamaican vegan restaurant Dee’s Table.

Available for takeaway via click & collect and nationwide delivery via Deliveroo from Honest Burgers.

Shoryu Ramen is celebrating Veganuary with 20 per cent off its White Natural Ramen DIY kits.

From £24, serves 2. Available nationwide from the Japan Centre – use the code VEGAN.

January sees eight tasty dishes including salted crispy tofu with fennel and pineapple salad, and pumpkin and orange cake. A bottle of vegan wine is included.

END_OF_DOCUMENT_TOKEN_TO_BE_REPLACED

END_OF_DOCUMENT_TOKEN_TO_BE_REPLACED
We and our partners use cookies on this site to improve our service, perform analytics, personalize advertising, measure advertising performance, and remember website preferences.Ok