Alternatives To Try If You Can’t Afford Le Creuset Cookware 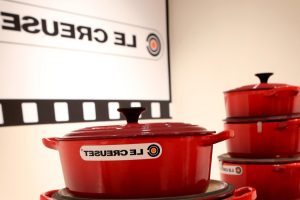 For the longest time, the go-to kitchen essential was a stand mixer (via Bon Appetit). If you were lucky enough to have enough money to shell out on a fancy kitchen product, people young and old were getting their hands on stand mixers so that we’d never have to waste another muscle manually combining ingredients. But it would appear that stand mixers are a bit old news now, and everyone has decided that the new “It” kitchen product — the one that would instantly make you look like a professional in the kitchen — is a Le Creuset item.

Le Creuset was founded in 1925 and has been a luxury cookware item in the homes of many ever since. Their products are handcrafted in France, made from the finest materials and highest quality iron, according to their website. But with such high praise comes an even higher price tag, making Le Creuset borderline unaffordable; the average cost of their iconic Dutch ovens costing anywhere between $200 to $1,000, depending on the size (via Insider). But if you’re dreaming of becoming a budget Julia Child, keep reading to hear some of the best, affordable alternatives to the expensive cookware company Le Creuset.

According to the New York Times, what makes a solid and reliable Dutch oven is one that has range — that means it can handle soups, stews, meats, and breads without fail. In addition, a Dutch oven should last for many years, and will typically only do so if it’s made of high-quality enameled iron that can withstand high temperatures. Therefore, Bustle recommends the Lodge Enameled Cast Iron Dutch Oven as the best alternative to a Le Creuset one.

Like Le Creuset, Lodge understands the concept of long-running businesses, having been founded in 1896 — even earlier than Le Creuset! Lodge is perhaps best known for their cast-iron products, which is why their Dutch ovens are made with the same high quality materials that last and can withstand temperatures up to 500 degrees Fahrenheit, according to Bustle.

Lodge’s alternative has also been deemed a valiant option because of its wide handles that make this hot and heavy Dutch even easier to handle, a sentiment that is equally mimicked by the Times’ ranking of the best Dutch oven options. Lodge’s Dutch oven will cost you about $90 and can be purchased on Amazon or Lodge’s website.

The next Dutch oven alternative option is one from the company Great Jones, a young company that was founded in 2018 and seeks to help people feel more comfortable cooking at home. What is quite different about Great Jones to the aforementioned companies is that it has quite a youthful tone to it, which transfers right over into their products.

When you first look at their Dutch oven — a product they call “The Dutchess” — you might not instantly recognize it as such, as the design is totally unique. Indeed, Great Jones opted for an oval shape, which they attest provides better space for “browning and searing,” and is better in preventing food from sticking to the bottom.

This fun oven comes in a variety of colors, including blue, green, yellow, pink, grey, black, and white — but don’t let the cutesy exterior fool you, this Dutch oven means business, and can withstand temperatures of up to 500 degrees Fahrenheit. The product will set you back $155, which might be priced higher due to the aesthetic customization and unique design. But hey, it’s still a bargain compared to Le Creuset.

Martha Stewart’s products have never let us down, and they probably won’t start anytime soon. Within the Martha Stewart Collection of cookware includes her Enameled Cast Iron Round Dutch Oven. This product boasts being easily moveable from stove to table while still being heavy-duty enough to accomplish all your cooking needs — baking, browning, slow cooking, and more.

Similarly to the Great Jones Dutch oven, it comes in a variety of colors, reminding us that working hard in the kitchen doesn’t have to mean looking bad. Design wise, it perhaps looks most similar to the Le Creuset design, especially if you opt for Stewart’s orange — or “Persimmon” — option. The Dutch oven typically goes for $199.99, but often has deals and discounts, making it at times as low as $84.99. It has nearly 1,000 reviews and sits at a 5-star rating at Macy’s, with users absolutely gushing over the form and function of their beautiful Martha Stewart Dutch oven.