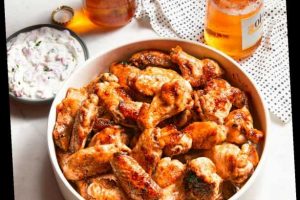 The actress-and-chef couple, who star in the new Food Network at-home series Amy Schumer Learns to Cook, coat their baked wings in a "sweet and succulent glaze"

3. Add wings to soy sauce mixture; toss to coat. Arrange in a single layer on prepared baking sheets. Bake in preheated oven until wings are golden and crisp and a thermometer inserted in thickest portion of meat registers at least 165°, about 40 minutes, rotating baking sheets between top and bottom racks and flipping wings halfway through baking time.

4. Meanwhile, stir together yogurt, parsley, shallot and water in a small bowl until combined. Serve wings alongside dipping sauce.

Quick tip! If you're out of soy sauce, mimic its umami flavor by using the same amount of Worcestershire sauce or about 2 tablespoons of fish sauce.

END_OF_DOCUMENT_TOKEN_TO_BE_REPLACED

END_OF_DOCUMENT_TOKEN_TO_BE_REPLACED
We and our partners use cookies on this site to improve our service, perform analytics, personalize advertising, measure advertising performance, and remember website preferences.Ok