Home » Food & Drink » An art student dumped 62,000 pounds of carrots on a London street, and some people are outraged at the waste

An art student dumped 62,000 pounds of carrots on a London street, and some people are outraged at the waste 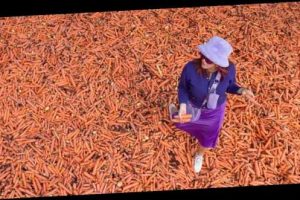 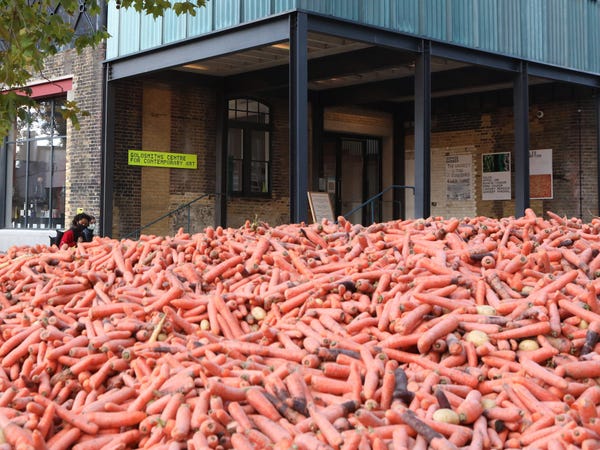 Artists typically want nothing more than for people to discuss the meaning of their work. However, one student artist may be regretting just how provocative his thesis project proved to be.

For Evans, the piece paid homage to both his youth and his family, who are farmers in Spain. As he explained on his website, he was engaging in the protest method called "Dumping," which he explained is the act of dumping vegetables on the street to become a physical barrier to get noticed as a way to protest falling produce prices.

"On one occasion when I was quite young, I remember people being very angry and upset as the cost of lemons had been devalued to such an extreme that it was costing the farmers money to sell their stock," Evans told Artnet. "This issue made many farmers dump, in protest, tons of lemons, creating a sort of sea of yellow. This, I guess was the first moment in which I became aware of the power of how governmental devaluation and international trade affected farmers."

However, Evans' critics saw the piece a bit differently.

Hypebeast reported, just moments after Evans unveiled his work, a group of his peers at Goldsmiths launched an Instagram account called @goldsmithcarrots. There, the students noted, the account was meant to protest "this incredibly wasteful art piece." The students added, "Lewisham is one of the poorest boroughs in London and this mass dumping of carrots at Goldsmiths is beyond insensitive … It's a massive slap in the face."

Only a few cupcakes left!!! Come down before we sell out 🥕🥕🥕🥕

Evans tried to squash the critics by noting that the carrots were all "unwanted" produce by the food industry. Following the exhibition, the carrots will be collected and sent to feed animals.

But that doesn' appear to be enough. According to Hypebeast, the students behind the @goldsmithscarrots account have been collecting carrots from the pile and using them to create dishes like vegan carrot cake and carrot soup. Then, rather than keeping the baked goods, the group is hosting daily bake sales next to Evans' work and donating proceeds to local food banks.

END_OF_DOCUMENT_TOKEN_TO_BE_REPLACED

END_OF_DOCUMENT_TOKEN_TO_BE_REPLACED
We and our partners use cookies on this site to improve our service, perform analytics, personalize advertising, measure advertising performance, and remember website preferences.Ok