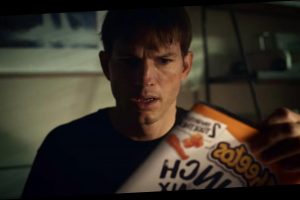 On Thursday, Cheetos unveiled a sneak peek at their upcoming ad for Super Bowl LV, which features the 42-year-old actor in a rather mysterious role.

At the start of the short teaser clip, Kutcher walks into a dark room for a private moment before he opens up a large manilla envelope and pulls out a series of photographs. "Oh my gosh," the That 70's Show alum says as he shuffles through black and white stills of what appears to be parking garage security footage.

Then, as he pulls out one final item included in the envelope — a flat and empty bag of Cheetos's new Crunch Pop Mix — Kutcher stares in shock before the clip cuts to black. "I knew it," the actor is heard saying before the final moments of the video play. According to a press release, fans of the cheese puff snacks and the Two and a Half Men star will have to wait until Super Bowl Sunday on Feb. 7 to learn more about the mystery involved in the clip. The release also teases that Kutcher will involve other "celebrity star power" into the "dramatic — yet mischievous — story."

After an 11-year hiatus, Cheetos returned to the Super Bowl commercial scene with the '90s hip hop icon for a fun advertisement. In it, viewers were taken back to Oakland in 1989 when MC Hammer was in the process of songwriting.

In the clip, the musician is seen eating a bag of Cheetos in front of a piano, but when he goes to play he realizes he can't touch the keys because his hands are covered in "cheetle" (the official name for the orange dust left on your fingers). Thus, as the legend goes, "U Can't Touch This" was born.

"We saw the Super Bowl as the only fitting place to debut our biggest product launch in a decade with Cheetos Popcorn," Rachel Ferdinando, SVP and chief marketing officer at Frito-Lay North America said at the time. "And of course, joining our mischievous brand identity in a playful way with MC Hammer was a perfect fit."