Banza Debuts Gluten-Free Frozen Pizzas Made with a Chickpea Crust 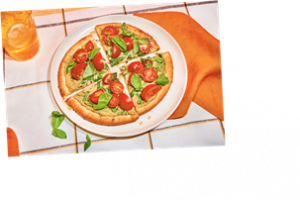 Banza, the food brand behind chickpea pasta, chickpea rice, and chickpea mac and cheese, has expanded into a new category: pizza. The company announced four new products on Monday made with a chickpea-based pizza crust.

The gluten-free pies, which are available at Whole Foods, Target, Wegmans, Heinen's and on Amazon for $8.99, are sold as two plain crusts per package, or in three different pre-topped options: Four Cheese, Roasted Veggie, and Margherita.

PEOPLE got a first taste of the products and the Roasted Veggie was our favorite of the ready-to-eat pies, but each one delivered as a solid weeknight meal if you keep one thing in mind: it's not meant to be real pizza. It's frozen pizza, so don't go trying to compare it to a New York-style slice and you'll enjoy it a whole lot more.

We found that the crust holds up very nicely to a variety of toppings. We topped the plain crusts with sauce, handfuls of chopped veggies and melty cheese, and even the center of the pie kept its crunchy texture, unlike most cauliflower-crust pizzas. Like all Banza products, it's healthier than the traditional option too. Each pie packs more protein and fiber and less net carbs and sodium than your average frozen pizza.

During a virtual press event, co-f0under Brian Rudolph emphasized that they aren't trying to replace the fresh-from-the-restaurant pizza most families reserve for Friday nights, but rather offer a compliment that's quick (they bake in about 15 minutes) and healthy, for any day of the week.

END_OF_DOCUMENT_TOKEN_TO_BE_REPLACED

END_OF_DOCUMENT_TOKEN_TO_BE_REPLACED
We and our partners use cookies on this site to improve our service, perform analytics, personalize advertising, measure advertising performance, and remember website preferences.Ok