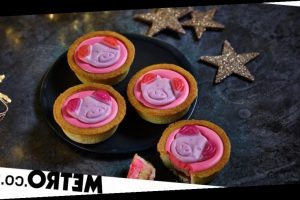 We’re not going to say outright that mince pies are overhyped… because we fear the backlash.

But what we will say is that if you aren’t a fan of dried fruits and spices in a pie, you’re not the only one.

The good news is that this year, you won’t have to grit your teeth through eating everyone’s favourite festive treat, as M&S has done us all a solid and brought out a genuinely tasty alternative.

It’s pretty heavy on Percy Pig, basically… so if you find the sweets a bit sickly, these pies might not be for you.

But if you are a diehard Percy fan, you’ll definitely want to give these pies a go.

Percy Pig Percymas Pies Review! 🐷 – Oink oink! Percy has transformed again into another form… this time pies! Designed as an alternative for those who don’t like traditional mince pies, these consist of “pastry filled with a grape jelly and berry and grape flavour sponge, topped with pink icing and a gum sweet”. They cost £2 for 4 pies. They’re a little bit like Cherry Bakewell tarts and rather nice! The pastry is nice and buttery, with the jam giving a light sweetness and the sponge adding some extra fruity flavour. Definitely a hint of Percy in there! The icing gives the classic Cherry Bakewell style sugar rush and of course Percy Pig is literally…the Piggy on top! Overall a fun alternative to mince pies which Percy Pig fans will love! Find these in M&S now 🐷 – #marksandspencer #marksandspencers #marksandspencerfood #mands #percypig #newfood #junkfood #christmasfood #christmas #xmas #mincepie #foodie #bakery #desserts #iifym #foodlover #frosting #percypigs

‘The pastry is nice and buttery, with the jam giving a light sweetness and the sponge adding some extra fruity flavour. Definitely a hint of Percy in there!

‘The icing gives the classic Cherry Bakewell style sugar rush and of course Percy Pig is literally…the Piggy on top!’

If you do fancy loading up on Percy pies for Christmas (or for the next few weeks as a non-festive treat), you can pick up a pack of four for £2 in stores now.

END_OF_DOCUMENT_TOKEN_TO_BE_REPLACED

END_OF_DOCUMENT_TOKEN_TO_BE_REPLACED
We and our partners use cookies on this site to improve our service, perform analytics, personalize advertising, measure advertising performance, and remember website preferences.Ok