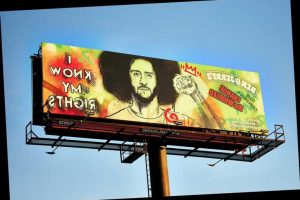 Ben & Jerry's is backing Colin Kaepernick in a big way.

The ice cream company unveiled a mural and billboards in Tampa Bay, Florida where the Super Bowl will take place on Sunday, Feb. 7. The artwork features Kaepernick and the phrase "I Know My Rights," an ode to the activist's non-profit Know Your Rights Camp, which aims to empower and educate Black and Brown people.

Kaepernick has openly protested police violence and systemic oppression for years. He ultimately became an unsigned free agent in the NFL after kneeling during the Star-Spangled Banner to protest police brutality while playing for the San Fransisco 49ers.

"As we look back, it's clear that Colin was on the right side of history," said Chris Miller, Ben & Jerry's Head of Global Activism in a statement. "His pre-game protests were before George Floyd's murder; before the 2020 summer of racial reckoning. He knew a long time ago that we need to address the root causes of racism and the structures of our society that are so brutal to Black people. We wanted to be part of the effort to honor Colin's courage and legacy because we share the same values."

The mural, titled "Change the Whirled," was created in partnership with artist-activist Brandan "BMike" Odums. The painting depicts young people of color wearing t-shirts emblazoned with various phrases including "Power to the People" and "I Know My Rights." Kaepernick is also featured on one of the t-shirts with his fist raised in solidarity with the Black Lives Matter movement.

"The blueprint to tomorrow is in our imagination," Odums said of the mural. "I think, ultimately, it's the idea of allowing people, especially young people, the agency to understand that the way things are isn't the way they're supposed to be."

On Feb. 7, Ben & Jerry's along with the Know Your Rights Camp will host a drive-through meal at the mural site where members of the community will be treated to a family-sized meal and a pint of Ben & Jerry's. Late last year, Ben & Jerry's announced its partnership with Kaepernick unveiling a new flavor, also titled Change the Whirled. The dessert is vegan, like Kaepernick, and features a non-dairy caramel sun butter base that is swirled with fudge chips, graham crackers, and chocolate cookies.

100% of Kaepernick's portion of proceeds from each pint sold go towards his Know Your Rights Camp Foundation.