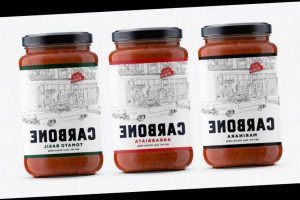 Forget the crazy reservations — now you can enjoy the famous taste of Carbone from the comfort of your own kitchen.

The iconic New York City Italian restaurant, located in Greenwich Village and loved by critics and celebs alike, is launching a line of pasta sauces through its new consumer goods brand, Carbone Fine Food, according to a press release.

The sauces are available now on Amazon and Carbone Fine Food's website and are set to enter Stop & Shop locations in New York, New Jersey, Connecticut, Massachusetts, Rhode Island and across the Eastern Seaboard in the coming months.

Created by Mario Carbone, Rich Torrisi, and Jeff Zalaznick, co-founders of global restaurant company Major Food Group, the jarred sauces are available in three varieties: marinara, arrabbiata and tomato basil. (No word on whether they're planning to release their famous vodka sauce yet.) "Creating staple sauces for the home cook that possess the craft we're known for has been a goal for some time," Carbone said in the release.  "The challenge was to create a product that would not only cut down cooking time but also truly deliver on the promise of unequaled flavor, and we can now say that that's exactly what we've done. We couldn't be more excited—and there's much more to come."

According to the release, the sauces highlight fresh ingredients and take approximately one hour to produce. Carbone's team of chefs make each variety in small batches using Italian tomatoes picked at peak ripeness. "The sauce category is a crowded one, but what it is lacking is a premium product that can stand up to what's served in restaurants," Carbone Fine Food CEO Eric Skae said. "Chefs Mario and Rich have created the highest quality sauce on the market. They found a way to jar the Carbone experience. I've never seen anything like it."