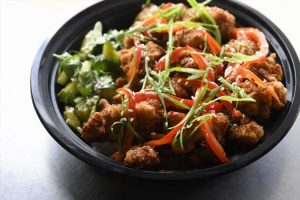 While we’ve been keeping a running list of the restaurants closing their doors for good during the coronavirus pandemic, it’s important to note that other new businesses are finding opportunities to open amid all of the shifting.

The Berkeley Ginger Pig will be Hess’ first brick-and-mortar restaurant. A former attorney, she left her previous career to make recipes learned while living in Beijing for a year with a host family.

Dishes such as char siu pork, Sichuan chicken, smashed cucumbers, Auntie Zhang’s noodles and curried “Bangkok” rice balls will be on the menu. A full bar will add cocktails and more to accompany Hess’ food.

Last May, when we first reviewed the Ginger Pig food truck, our critic gushed over Hess’ street food dishes, inspired by her time in China as well as travels to Thailand, Japan, Malaysia and the Philippines.

Since then, Hess has opened and operated a stall out of Boulder’s Rosetta Hall. She also has started a new restaurant group with longtime friend and mentor chef Carrie Baird, who has opened her own stall, Rose’s Americana, inside the Boulder food hall.

The Ginger Pig has finished operating at Rosetta and should start serving in Berkeley out of its food truck later this month as renovations continue on the restaurant space. Hess plans for a full restaurant opening by September or October.

Subscribe to our food newsletter, Stuffed, to get Denver food and drink news sent straight to your inbox.