Home » Chrissy Teigen Looks at Restaurant Spaces in Beverly Hills: 'We Are About to Disrupt Some S—'

Chrissy Teigen Looks at Restaurant Spaces in Beverly Hills: 'We Are About to Disrupt Some S—' 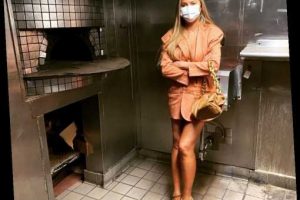 Chrissy Teigen appears to have some exciting plans coming in the restaurant industry.

On Thursday, the best-selling cookbook author, 35, shared an Instagram post in which she gushed over her excitement at looking into market/restaurant spaces in Beverly Hills, working with Hollywood interior designer Jake Arnold.

The post featured a photo of Teigen wearing a fancy outfit while standing in a restaurant kitchen next to a pizza oven.

"it is not often I am proud of myself," Teigen began in her caption. "I have a fantastic quality of cheering others on but the downside of rarely being happy for my successes! But looking at market/restaurant spaces in the HEART of Beverly Hills, working with the likes of @jakearnold and even morrrre talented people, my god, I could have never imagined."

"This…this makes my flatlined levels of pride have a bit of a heartbeat," she added. "We are about to disrupt some s–t. Xx."

Teigen also shared her excitement for the upcoming project on Twitter, writing, "about to go look at a cafe/market space in the heart of Beverly Hills. It's very rare for me to be excited about myself (others only!!) but ok I'm excited!!"

Many of Teigen's followers flooded the comments section of her post and congratulated her on the latest endeavor, including Jordin Sparks, Octavia Spencer and Michelle Pfeiffer.

Arnold, who has previously worked with stars like Aaron Paul, Rashida Jones, Julianne Hough and Sophia Bush, commented on the post, "❤️ You." Teigen's tease at entering the restaurant business comes as the star recently re-launched her popular website Cravings — which now includes a shop to help fans live their ultimate cook-and-lounge life.

"I spend the majority of my life in the kitchen — usually in a robe — and the only thing I love more than cooking, eating, and being horizontal on the couch is watching other people get inspired and find joy through food," Teigen wrote on Instagram earlier this month. In September, Teigen announced that she started working on her third cookbook alongside Adeena Sussman, though she later put the project on pause indefinitely.