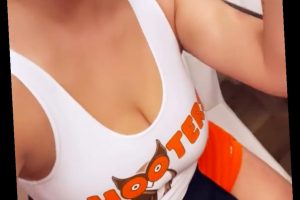 Chrissy Teigen and John Legend had a hoot at a friend's Hooters-themed birthday party on Thursday night.

To throw the party, Teigen, 35, got into the spirit by wearing a white tank top bearing the logo, orange shorts and a tiny apron as she danced to the Pussycat Dolls at the bash for her stylist Alana Van Deraa.

Legend, 42, sported a black polo shirt and a hat with the Hooters logo.

Everyone at the event had some sort of merchandise related to the chain wing restaurant, including the couple's daughter Luna who wore a Hooter's T-shirt.

There seemed to be plenty of merch to go around, with a stack of the company's shirts sitting in front of Legend on the table and hats strewn about. Hooters inspired decorations included small champagne bottles filled with orange and white M&Ms and chicken wing confetti covered the table, as well as orange and white balloons around the house.

The group enjoyed a menu that featured three wing styles and flavors – Original-Style with garlic habanero ranch, Naked with medium sauce, and Boneless with a chipotle honey sauce – as well as sides garden salad, curly fries and celery. Carlos Bakery provided the group with a cake that was orange and white and said, "Hooters Alana Turns Twenty Ate." At the top of the two-tier cake was a cookie of a waitress from the wing franchise.

Teigen later shared a photo of the "aftermath" including dirty plates, rogue wings and celery sticks, and a half-eaten cake.