Home » Food & Drink » Chrissy Teigen's Mom Pepper Dedicates Her Cookbook to Late Grandson Jack: 'We Talk About Him Every Day'

Chrissy Teigen's Mom Pepper Dedicates Her Cookbook to Late Grandson Jack: 'We Talk About Him Every Day' 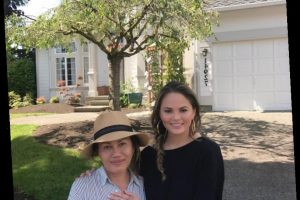 Chrissy Teigen's mom Vilailuck "Pepper" Teigen is carrying her affection for and memory of her late grandson into her newest labor of love.

In a new profile for The Wall Street Journal, Pepper chats about family life and her upcoming Pepper Thai Cookbook, which she has dedicated to baby Jack.

She also named her daughter — a model, television star and cookbook author herself — the inspiration behind her new kitchen tome.

"[Chrissy] put a lot of trust in me and told me that I was the best cook and that I need to write these recipes down," Pepper told WSJ. "And I'm so glad she did. So now I have a book and something that I can pass down to her, Luna and [grandson Miles Theodore, 3 next month]." Chrissy Teigen Says "Unimaginable" Pregnancy Loss "Transformed" Her: "In a Way It Saved Me"

Last fall, Chrissy, 35, and husband John Legend revealed devastating news that they had lost their third child, a son named Jack who was conceived naturally, at 20 weeks of pregnancy. (The couple's older two children, Miles and Luna, were conceived via in vitro fertilization.)

Pepper opened up about the loss in a heartbreaking Instagram post on Oct. 1, sharing photos and video of herself saying her final goodbyes at the hospital.

"My heart aches love you so much baby Jack 👼🏻❤️❤️," she wrote in the caption, alongside the hashtag "สู่สุขตินะลูก," which translates from Thai to English as, "To happiness." Currently building a new home, Chrissy and her musician husband, 42, are honoring their son with a special tree planted inside their house — and helping Luna and Miles foster memories with their baby brother.

"It's important for us in Thai tradition that we always embrace the ones we've lost, and they're never, ever gone. This tree being planted inside the home, the whole reason why I wanted it was so Jack's ashes could be in that soil and he could be with us all the time and grow through the beautiful leaves in this tree," she told PEOPLE recently in her cover story for the Beautiful Issue, which she posed for alongside her children and mother.

"The way Miles and Luna talk about him is so beautiful and reminds me of when I was little talking to my grandpa who was just sitting bedside next to my mom in a little urn," Chrissy continued. "It's all beautiful, and I love that tradition carries down."

The Pepper Thai Cookbook: Family Recipes from Everyone's Favorite Thai Mom, out April 13, is available for preorder now on amazon.com.