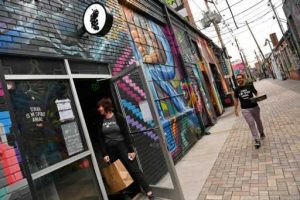 While it wasn’t the two-year extension some were hoping for, a new law passed Monday in the Colorado legislature allows bars and restaurants to continue selling alcohol to-go for another year at least.

The law will take effect as soon as Gov. Jared Polis’ executive order with the same effect expires (that date is still unknown). Liquor takeout and delivery will continue then through July 2021, when the legislature will have to decide again on the future of alcohol to-go.

“This bill provides critical relief for an industry that has been uniquely hard-hit by COVID-19,” Colorado Restaurant Association CEO and president Sonia Riggs said in a release. “For some it will literally be the difference between surviving and closing.”

According to the Association, 87% of Colorado restaurants have reported making revenue from alcohol to-go sales, with 20% reporting “significant” revenue made from those sales.

“It’s very very important for it to be an option to sustain businesses for the next year,” said Angela Neri, who owns the downtown Denver bar Pony Up. Neri said her business was able to survive the shutdown just barely by selling to-go alcohol.

Now she worries that restaurants and bars will have to go back to takeout-only service at some point if coronavirus case numbers increase, in which case another shift in their business model would “need to be quick,” she said. “So let us keep the option.”

Her LoDo bar’s biggest sales months are usually during the start of baseball season. This past weekend, with Pony Up open for walk-in seating, Neri said it took her four days to make the same amount of money that she would have made previously on one spring weekend night.

“We’re still at only half capacity, so how do we make up at least a little bit of that?” she asked.

During a Monday press conference, Gov. Polis said that, in addition to restaurants, bars and night clubs could start to open as early as next week at 25% capacity or 50 people max indoors.

As soon as July, restaurants and other gathering places across the state could start to increase their capacities. This will depend on current COVID-19 cases, though, according to Polis’ draft guidelines released this week.

But Neri is watching the news in places like Arizona where there’s been a resurgence of cases. She’s seeing fellow business owners respond to this in a range of ways — some restaurants and bars are seating fewer people than required to play it safe, while others are packing their houses while they can. She worries the latter will do more to ruin the success of businesses like hers long-term.

Of selling alcohol to go amid everything else, she said, “It’s a nice bonus, but it’s not going to make or break us.”

What Neri and other independent operators are really hoping for is the passing of a restaurant stabilization fund or the RESTAURANTS Act, which would grant $120 billion to the ailing industry nationwide in order to survive the rest of the year. She’s not sure of its chances; she’s heard from another restaurateur that it’s “dead in the water.”

As the alcohol delivery bill headed towards a vote last Friday in the House, legislators took the floor to speak on its behalf. Someone commented that the discussion was reminiscent of the “dogs on restaurant patios” bill, which passed back in March, a week into the coronavirus shutdown.

“Coloradans, we love our freedom and we love our beer,” Representative Bri Buentello said on Friday of alcohol takeout. “This is simply to call a spade a spade and give us … something to hang our hats on.”

The bill passed unanimously with a vote of 65-0.

Subscribe to our food newsletter, Stuffed, to get Denver food and drink news sent straight to your inbox.