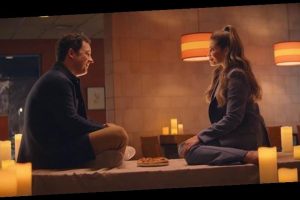 Cory and Topanga are reuniting in the name of Valentine's Day — and pizza.

Boy Meets World alums Danielle Fishel and Ben Savage have teamed up for Panera Bread's new "Forever Flatbreads" short film, which sees the duo channel some of the most iconic romantic comedies as they navigate one of the most relatable conflicts a couple can face: the last slice of pizza.

Directed by Ben's older brother, fellow actor Fred Savage, the 1-minute clip (created in part to advertise the chain's 50 percent off promo code for any flatbread, from now until Feb. 16) begins with Ben, 40, and Danielle, 39, meeting again by chance inside a Panera.

A voiceover says, "Things are about to heat up when two old flames discover the one thing that could pull them back together" — namely, pepperoni flatbread pizza.

The two are then shown frolicking together and bonding over their favorite snack — and it's all laughs until Ben takes the last slice of pizza. "I didn't think you'd want it!" proclaims Ben before Danielle storms off, tapping into The Break-Up with, "I wanted you to want me to want it!"

Subsequent scenes show the duo make up (because not even pizza can keep Cory and Topanga apart, right?) as they leverage some of the most recognizable scenes from films like Love Actually, When Harry Met Sally, Sixteen Candles and Jerry Maguire.

Chatting with PEOPLE about reuniting to make the ad, Danielle says any excuse to come together with Ben — whom she also reprised her role with on Girl Meets World — is a good one.

Adds Ben, "Having Fred be there, and Danielle, who I grew up with … it was such a fun experience because it really is like being with family. And you don't really get those opportunities often, in this business, to work with people you've grown up with." This year, the stars are looking forward to a more low-key Valentine's Day with their respective loved ones. Says Fishel of her 19-month-old son Adler Lawrence, "I bought him some homemade valentines, and we are going to make little valentines to send to his friends and grandmothers."

And amid the ongoing COVID-19 pandemic, the actress and haircare guru is "excited that this year, there's less of an emphasis on needing to be out and dress up, and more of an emphasis on being comfortable and cozy, whether that means you're celebrating by yourself, or with a best friend or a partner."

Panera's TGIF promo — a nod to the '90s TV lineup that included Boy Meets World, but this time standing for Thank God It's Flatbread — gives customers 50 percent off all flatbreads (including the newly launched pepperoni and four cheese) with the code "TGIF" on the Panera app from now through Feb. 16.