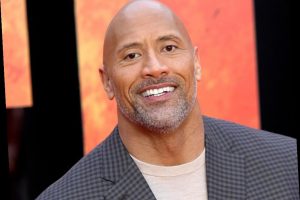 Dwayne Johnson is truly a jack of all trades. The retired pro wrestler has had an extraordinarily successful second act as an actor and, more recently, as an entrepreneur, thanks to his Teremana tequila line. And if you didn’t already know, ice cream impresario is on that list, too. For the second time, ‘The Rock’ has teamed up with Salt & Straw to create a boozy ice cream flavor that’s sure to bring us some much needed holiday cheer this season.

The flavor names are hilarious and we can only imagine the taste is even better. The newest addition to the pack is ‘Dwanta’s Teremana Spiked Eggnog’ made with Johnson’s own Teremana tequila. The two flavors from last year, ‘I Saw Mommy Kissing Dwanta Claus’ and ‘Rock’n Around the Christmas Tree’ are also available to purchase. In fact, you can get a 5-pint Dwanta Claus Holiday Pack (which also includes Chocolate Gooey Brownie and Double Fold Vanilla) for $65.

Johnson took to Instagram to promote the news, singing a hilarious rendition of “Here Comes Santa Clause” by replacing the lyrics with “Here Comes Dwanta Clause.” The packaging screams festive, holiday cheer with a red lid and handwritten flavor names from Dwayne himself. The best part of all? For every pint of Dwanta’s Teremana Spiked Eggnog sold, Teremana and Salt & Straw will be donating one dollar to World Central Kitchen. Who doesn’t love giving back during the holiday season?

Sometimes you just need a boozy, adult treat and these delicious ice creams do just the trick. Make sure to get them fast, because they’re sure to sell out again this year.

Before you go, check out our top foolproof holiday gifts for absolutely everyone on your list:

END_OF_DOCUMENT_TOKEN_TO_BE_REPLACED

END_OF_DOCUMENT_TOKEN_TO_BE_REPLACED
We and our partners use cookies on this site to improve our service, perform analytics, personalize advertising, measure advertising performance, and remember website preferences.Ok