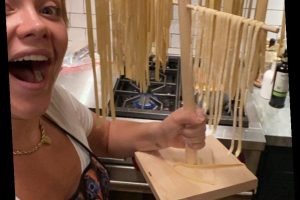 On Saturday night, the couple worked together to make homemade ravioli and fettuccine pasta and documented the thorough process on Instagram.

Braff, 45, shared a series of videos on his Instagram Story of the pair making the ravioli, to which they eventually added a creamy red sauce and parmigiana cheese.

Pugh, 25, also posted footage of the step-by-step process in creating both dishes of pasta. "I know they're not perfect… FIRST TIME," she wrote alongside a photo of the ravioli before it was done.

Once the ravioli and fettuccine were both served, the Don't Worry Darling actress captured a photo of both plates, writing, "Both get a taster of each!" Pugh also shared an Instagram video of herself twirling the homemade fettuccine before it was served. "We reached a new level to quarantine last night. Home made fettuccine and ravioli. For a first time.. pretty stoked! I'll say it, oh dear. This is dangerous," she wrote.

Pugh and Braff have been friends since August 2018 and she was cast in his short film In The Time It Takes to Get There, which was released in April 2019. That October, the Scrubs star shared a photo of Pugh alongside three of his friends with the caption, "People I love."

More recently, in November 2020, Braff spoke about his relationship with Pugh, especially about her defending their romance on Instagram after they received criticism online over their 20-year age difference.

"She literally sat down, hit record on her phone and said that," Braff told Mr Porter's magazine about Pugh's lengthy Instagram video in which she reprimanded her fans for criticizing the couple's relationship. "I thought, 'How could I possibly follow anything as intelligent and articulate as that?' So, I chose not to." A week prior to their pasta date night, Braff celebrated his girlfriend's 25th birthday with a sweet message on Instagram alongside photos of their adventures together.

"Happy Birthday to the most fun person I've ever met. I would have felt blessed to have smiled with your [sic] for one night. I can't believe I get to giggle with you everyday," Braff wrote. "What a pleasure it is to know you. What a gift to the world it was that you were born."

END_OF_DOCUMENT_TOKEN_TO_BE_REPLACED

END_OF_DOCUMENT_TOKEN_TO_BE_REPLACED
We and our partners use cookies on this site to improve our service, perform analytics, personalize advertising, measure advertising performance, and remember website preferences.Ok