Home » Food & Drink » For some reason, this cat enjoys eating like it's in the Hungry Hippos game

For some reason, this cat enjoys eating like it's in the Hungry Hippos game 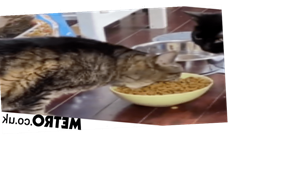 Ever watched your cat eat?

Our beloved kitties are usually a fan of some delicious treats.

But one little cat likes to really go to town, taking huge mouthfuls which is reminding some people of the popular children’s game Hungry Hippos.

When the cat’s owner, a public defender from Philadelphia called Luke, tweeted it, he didn’t expect the video to go viral.

More than three million people tuned in to see Luke’s cat gorging on his food.

Many were tickled by the fact that the eating habits were reminiscent of Hungry Hippos which – to those who aren’t aware – is the tabletop game where each player has a lever attached to a hippo, which must consume as many marbles as possible to win.

In Luke’s video, captioned ‘what in the world kind of pig cat eats like this?’, there was another cat who seemed to eat a bit more normally.

But most viewers were enchanted by the hungrier cat.

While it was all fun and games, some Twitter users pointed out that pets eating more than they should, could be signalling a difficult history.

One person wrote: ‘If a cat has been feeding for itself outdoors before it finds a home, this happens.

‘When they finally get regular food their instincts are to gorge. It causes extreme weight gain. I feed mine in different spots for that very reason. They learn that no one is coming for their food.’

Another echoed the thoughts, saying: ‘I rescued a dog who was abandoned and nearly starved to death. He acted like this with his food. Heartbreaking. Give him his own bowl in a separate place. No competition!’

Cats who eat too much can put on weight or have a higher risk of joint pain, breathing difficulties, arthritis, diabetes, liver, and teeth problems.

You can control how much your pet eats by introducing obstacles to do before reaching their food or automatic food dispensers.

That way, even if they enjoy biting into their food like a hungry hippo, at least they’re eating a healthy amount.

Do you have a story?