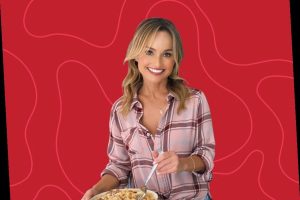 Jammy, sweet, and earthy, caramelized onions are one of our favorite additions to any recipe. They can transform even the simplest meals into something extraordinary, but we won’t lie – making them takes longer than most recipes will admit. So when we’re making caramelized onions, we like to pair them with something simple, whether that’s pasta, burgers, or rice. Giada De Laurentiis knows that caramelized onions become the star of any dish, so in her crostata recipe, she has you focus on the cooking that counts. That means that she uses a storebought ingredient as a shortcut, and it’s one that we usually already have in our fridge: pie crust.

A lot of cooks will tell you that nothing beats homemade pie crust, whether you go for an all-butter crust or something made with shortening. But we’ll be honest – unless it’s a truly special occassion, the last thing we want to deal with is the sometimes sticky, sometimes crumbly, but always pain-in-the-butt process of rolling out pie dough. That’s especially true when you’re making a pie or crostata with an especially flavorful filling, because chances are they’ll wipe out the nuance of your homemade crust anyway.

De Laurentiis instead has you focus your energy on cooking your onions in a sturdy, thick-bottomed pan (like an enameled cast iron skillet) until they’re deeply browned, soft, and sweet – truly caramelized, unlike those recipes that call for a mere 5-10 minutes of sauteeing. This takes about 30 minutes. Then, she mixes the onions with balsamic vinegar and fresh oregano.

Next, she adds tangy goat cheese and caramelized onions to the center of a storebought pie crust, which saves tones of time. She folds up the edges, and then the crostata bakes in the oven for about 30 minutes. When it comes out, sprinkle a peppery, lemony arugula salad over the top to help balance out the rich flavors of the caramelized onion and goat cheese, and you’ve got a surprisignly sophisticated weeknight meal, all because the storebought pie crust shortcut let you spend the extra time to you needed get your onions perfectly caramelized.

Before you go, check out our gallery below: