Here’s What You Need To Know Before Eating Beyond Meat 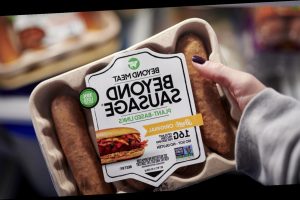 While meat alternatives aren’t new (hello, veggie burgers!), the concept of making a meatless substitute that tastes like meat is seeing a rise in popularity. However, the popular meatless meat brand Beyond Meat isn’t a new concept.

Beyond Meat was founded in 2009, although most of its marketing and distributing began in the US in 2013 (via Money Inc.). The first plant-based burgers went on sale in 2016 and sold all over the world, but since then new products have been added, like sausages, “beef” crumbles, and even meatballs! These products are unique from a lot of the previously sold vegan and vegetarian alternatives because they are allergen-friendly (via The Kitchn).

According to The Kitchn, meat alternatives like tofu or seitan will often have soy or gluten as their base. Beyond Meat excludes these ingredients in their products by using non-GMO plant-based proteins such as pea, mung bean, and brown rice. Another difference is that while tofu and seitan do not taste like actual meat, Beyond Meat does. The texture and flavors not only mimic real meat, but they even use beet juice for color!

Plus, eating Beyond Meat has health benefits. There is more iron and protein in Beyond Meat than ground beef, and less total fat and cholesterol (via The Kitchn). Depending on your dietary needs, this could be a great alternative to real meat.

Beyond Meat saving the environment but at what cost?

If you’ve been to your local grocery store and compared the cost of regular meat to Beyond Meat, the price disparity is obvious (via Vox). It can certainly be a factor when making the decision as to what product to purchase, especially if you’re on a budget. There’s no denying that Beyond Meat and other plant-based substitutes are more expensive than regular meat, but what are the benefits besides nutrition?

The Center for Sustainable Systems at the University of Michigan did a study, showing that 90 percent less greenhouse gas was being emitted during the production of Beyond Burgers than with regular meat. This production also used 46 percent less energy, demonstrating that plant-based meat production could have a better impact on the environment.

It would be remiss not to mention a big reason people make the switch to alternative meat. Vegans and vegetarians would be happy to know that Beyond Meat is an award-winning company. Not only has the Humane Society backed them financially, but PETA named them Company of the Year in 2013 (via Money Inc.).