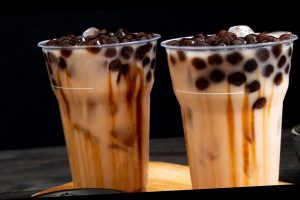 It seems hard to believe that there was a time when you couldn’t pick up a cup of refreshing bubble tea from your local mall or cafe. This Taiwanese drink first hit the U.S. some 20 years ago (according to Business Today), and it has been an American favorite ever since. What’s not to love? It’s a sweet concoction of brewed tea, milk and/or juice, and black tapioca balls known as “pearls.” You sip the tea, chew the pearls, and come away feeling indulged.

The name “bubble” originally referred not to the tapioca pearls, but for the bubbles that emerge when you shake the liquid concoction. But so many people have made the tapioca-bubble connection that it’s been accepted as part of the bubble tea narrative (per Sous Chef UK). The name of the drink also varies according to where you live; Asian American reports that residents of Western states are more likely to call it “boba tea,” while Northern and many Southern states stick with “bubble.”

Because it contains tea, a drink long known for its health benefits (including certain cancer-preventing properties, per Current Pharmaceutical Design), many people assume that bubble tea is a healthy alternative to drinks such as coffee or soda. If you hold this belief, you may want to think twice before your next drink order.

Why bubble tea isn't really healthy for you

A soothing cup of plain black or green tea is virtually calorie-free (per Healthline). A four-gram teaspoon of sugar adds 16 calories, but that still makes it a superior choice to your average can of cola or a Starbucks caramel macchiato. The more extra ingredients you add, the higher the calorie and fat content rises. That’s where bubble (or boba tea) falls short nutritionally.

According to WebMD, those adorable tapioca pearls alone add up to over 200 calories per half cup. They’re also made from cassava, a root plant that provides a lot of starch but no nutritional benefits, per UC Berkeley. Then there’s everything else that goes into the drink, which can include not only milk, but also fruit juice, chocolate, flavored syrups, egg custard, and other tasty ingredients. All that can add up before you realize it: According to a study published in Food Science & Nutrition, a large milk tea with tapioca averages about 448 calories.

A rarer but still real hazard of drinking too much bubble tea is that the tapioca pearls often contain guar gum, which can cause constipation. According to Health, drinking more than a couple of cups of bubble tea daily might wreak havoc with your digestion.

The takeaway? Bubble tea is a great once-in-a-while treat, but on a regular basis, you’re much better off with a cup of the plain stuff.

END_OF_DOCUMENT_TOKEN_TO_BE_REPLACED

END_OF_DOCUMENT_TOKEN_TO_BE_REPLACED
We and our partners use cookies on this site to improve our service, perform analytics, personalize advertising, measure advertising performance, and remember website preferences.Ok