Home » How to Get a Reservation at the Lost Kitchen, One of the Hardest-to-Book Restaurants in America

How to Get a Reservation at the Lost Kitchen, One of the Hardest-to-Book Restaurants in America 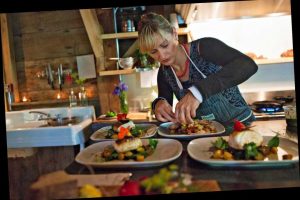 "Reservations got out of control. We couldn't handle it anymore," French, who just released a new memoir, Finding Freedom, tells PEOPLE in this week's issue. "Our phone lines just exploded. Everything just broke down."

French had been running the Lost Kitchen inside a restored gristmill "in the middle of nowhere" for only three years, after losing her first restaurant in a messy divorce. She started as a home cook and turned Freedom, a remote Maine town with only 719 residents, into a world-famous foodie destination. People visit from far and wide to taste her elegant but humble cooking style, using whatever produce is nearby and in season.

RELATED: Erin French Details Her Struggle with Addiction in New Memoir: 'I Wanted to Drown It All Out'

After the hectic 2017 year, French decided to ask people to send a postcard to be entered into a table lottery. She receives more than 20,000 cards a year, making it one of the hardest-to-book restaurants in the country.

There are only 48 seats available per night, four nights a week for six months out of the year (this year they are open from late May to October). You'll need some luck to be picked, but there are some things you can do to improve your chances.

Keep an eye on findthelostkitchen.com. French and her team — who also star in a series on Chip and Joanna Gaines's Magnolia Network (streaming on discovery+) — open up the call for postcards a few weeks before their first dinner. You'll need to follow the directions carefully as your card needs to be postmarked before the date indicated. Sign up for her newsletter so you don't miss the announcement. They truly treat the process like a lottery, picking cards at random, but it can't hurt to give yours some cute notes or creative art — if only because it brings French so much joy. "I feel we're getting to know these people as we see their cards," she tells PEOPLE. "They put themselves into each one. It's always exciting to see whose card it was when you get to meet them and they come into our world."

If you're chosen, someone will call you to arrange a date and time that works for your group (so lookout for a 207 area code!). But don't lose hope if you don't get a call right away: French selects new postcards later if a party cancels.

She even keeps all 70,000 postcards she's ever received in her attic. "The cards are like love letters," she says. "You can't throw them away. They're people's hopes and dreams."

Once you've secured a reservation, you're in for a treat. "Our expectations were so high that we were nervous that once we got there it would be very hard to live up to. Not only did it beat expectation but it far exceeded them," says Katie Peter, a Mainer who visited the Lost Kitchen in September with her sister and cousins. "The food was 100% all I dreamed of. And Erin's persona also really elevates the experience."

Come with an appetite and an open mind because no dinner is the same — French creates a new menu each day after seeing what foods are fresh that morning. What to know once you're planning a trip? Located about halfway between Augusta and Bangor, the town of Freedom is accessible only by car — a scenic trip through lush woods and rolling farmlands. If you're flying, the most convenient airport is in Portland, Maine, a 90-minute drive from the restaurant, so you'll need to rent a car at the airport.

If you want to stay the night, French will offer "glamping cabins" for the 2021 season but there will only be a limited number available. You can book a room at Jeweled Turret Inn, a charming bed-and-breakfast in Belfast, about 17 miles away, or head back to Portland, where there are a ton of hotels to choose from.

For more of Erin French's story, pick up the latest issue of PEOPLE, on newsstands Friday, and order her new book, Finding Freedom, here.