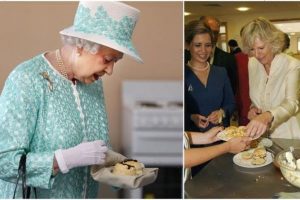 Afternoon tea is enjoyed with homemade traditional fruit scones, a popular British staple, and it is enjoyed by the Royal Family. The Queen is supposedly served afternoon tea on a daily basis, with her favourite teas including Assam and Earl Grey, royal butler Grant Harrold has previously revealed. Former royal chef Darren McGrady has also said the Queen’s favourite finger sandwiches are cucumber, egg and smoked salmon, all with the crusts cut off.

During one of his cooking tutorials on YouTube, Darren further explained: “I used to make shortbread at least once a week at Balmoral and it was always on the afternoon tea menu.”

However, fruit scones are the most traditional sweet food served with tea in the royal households.

Although there are a variety of scone recipes which cater to sweet and savoury preferences, the traditional scone served with afternoon tea is a fruit scone.

Royal chefs at Buckingham Palace shared a video of a fruit scone recipe on social media so royal fans can enjoy them in the comfort of their own home.

According to royal.uk: “Every year at Garden Parties across The Royal Residences, over 27,000 cups of tea, 20,000 sandwiches and 20,000 slices of cakes are consumed!

“The Royal Pastry Chefs are happy to share their recipe for fruit scones, which traditionally would be served at Buckingham Palace every summer.”

Read below to learn how to make royal fruit scones that have the Queen’s approval.

Preheat the oven to 180 Celsius. Mix the flour, baking powder, butter and sugar together in a bowl, until a crumb is formed.

In a separate bowl, whisk the eggs and buttermilk together.

Then add the liquid to the crumb mixture, and continue to mix the dough, until it is smooth.

An optional next step is to add the sultanas, and mix until evenly distributed.

Remove the dough from the bowl, flatten the dough and cover.

Cover and leave to rest for approximately 30 minutes.

Roll out the dough to a thickness of 2.5 cm and cut to your desired shape.

Rest the scones for another 20 minutes and gently egg wash the top of the scones.

Bake in the oven for 10-12 minutes until golden brown.

Cool before serving with jam of your desired flavour and clotted cream.