Home » Food & Drink » Is your potato salad watery? Here’s why

Is your potato salad watery? Here’s why 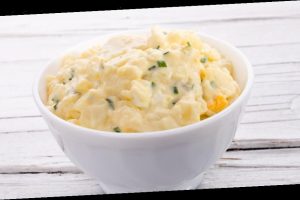 We’ve all been there. You get a new potato salad recipe that a friend or family member has sworn is the best ever – and as soon as you give it a go, the bottom of your salad is as waterlogged as a rubber dinghy with a leak. Why does this happen? It may have to do with the type of potato you’re choosing.

Consider: There are about 200 varieties inside the American potato-verse, and spuds are classified by texture, color, and size. With like a range like this, it is safe to assume that not all potatoes cook the same way. (Potato Goodness even has a guide which helps you identify the right potato for your needs). And the Potato Doctor at Idaho Potato want you to know that potatoes that have waxy skins or are moist don’t change properties after they are cooked, which means varieties like Russets are your best bets for a potato salad that won’t wind up a soggy disappointment.

You may be cooking your potatoes the wrong way

Once you’ve picked the right potato (and stored it properly before use, of course), it’s important to cook them just right to rid your spuds of excess water. The Potato Doctor recommends you peel and cutting your potatoes into large chunks so they cook more quickly and evenly. And don’t make the mistake of throwing the potatoes into boiling water. The Kitchn recommends starting your potatoes in cold water, bringing the water to a boil, and then lowering the heat, so the potatoes cook at a simmer. This way, they all cook at the same rate, and you don’t end up with some pieces that are underdone and others that are too mushy.

Next, add salt to the water to save yourself the trouble of seasoning the salad later, since the potatoes will absorb the salt. And after you drain the potatoes, try keeping them on a still-hot stove for a few minutes to give them a chance to dry out even more. And if this still doesn’t solve the watery problem?

If you’re really cursed and can’t seem to turn out a chunky potato salad that you’re really happy with, you might want to try something different. Japanese cooks make potato salad, too, but it’s a bit different from the potato salad that we might know. The salad, also known as yoshoku, features spuds which have been mashed (not too thoroughly, because you need to leave chunks in) and can be mixed with sliced cucumber, carrot, canned corn, egg, and cubes of ham. Just One Cookbook recommends that you use Russet potatoes which have been peeled and cut into big chunks before they are boiled in high heat and mashed. For a really authentic yoshoku, use Japanese Kewpie mayonnaise. It’s a game changer!