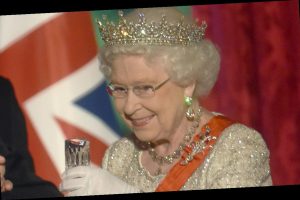 The more we learn about the Queen‘s diet, the more we’re on board with Her Majesty’s lifestyle – and it appears the mother-of-four enjoys the odd gin cocktail like us regular folk. According to former royal chef Darren McGrady, who worked for the royal family for 15 years, the Queen likes a Gin and Dubonnet.

He previously told CNN: “That’s her favourite drink.” He did clarify that it wasn’t a daily habit, explaining: “She doesn’t wake up in the morning and have a large gin and tonic.”

MORE: The Queen’s daily diet revealed: what the monarch eats for breakfast, lunch, tea and dinner

Dubonnet Rouge Grand Aperetif is a French drink made from a blend of red wine, herbs and spices. The Queen is said to take the cocktail as two parts Dubonnet to one part gin, with a slice of lemon and lots of ice.

Her Majesty with what looks like a Gin and Dubonnet

We found instructions on how to make the drink on the Dubonnet website, which goes as follows: “Combine all ingredients in a mixing glass, add ice and stir until well-chilled. Serve up in a Nick & Nora glass or rocks glass. Garnish with an orange swath.”

Is there anything more timeless than "The Dubonnet"? ⠀ Simply 1.5 oz Dubonnet and 1.5 oz London Dry Gin combined in a mixing glass with ice until well chilled, this classic stands the test of time.

The Queen is partial to a Gin and Dubonnet

If you’re wondering which other drinks the monarch enjoys, it will come as no surprise that she loves a good cup of tea. Her Majesty’s royal butler Grant Harrold spoke about British etiquette in BBC Three comedy show Miss Holland, which aired in 2018.

He said: “I am sure the Queen enjoys her Assam or her Earl Grey the traditional way, made with tea leaves in a teapot and poured into a fine bone china teacup. She will also use a strainer. It is also a myth that members of Royalty use their pinky when drinking, I have never seen that happen once.”