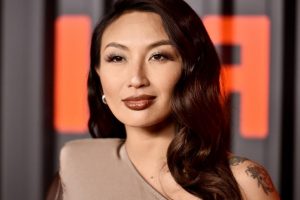 As everyone knows, Jeannie Mai-Jenkins is all about feeling good (and looking good) inside and out. When the holidays hit, it’s easy to fall into the never-ending party season, with comes with a bunch of small talk and hangovers from one too many holiday drinks. However, new mama Mai-Jenkins is on a mission: to end those hangovers and still have some tasty cocktails.

In a recent interview with US Magazine, the former Real host revealed her go-to drink of the season, saying, “My drink of choice used to be an old-fashioned until I realized I had to get up the next day and actually function. So I’m thankful for this spritzed version!” She discussed how she accomplishes this: by heavily relying on Owl’s Brew Spiced Chai & Cranberry Boozy Tea, which has notes of ginger, cinnamon, and cloves.

You only need some more basic ingredients to make her go-to drink (just don’t forget the oh-so-sweet bourbon!) After you get your ingredients, all you have to do is pour the drinks into a glass, mix it, and garnish it with your fruit of choice.

“What’s not to love?” the celebrity stylist said, and we have to agree!

As many of her fans know, she’s prepping a bunch to make her daughter Monaco’s first Christmas an absolute blast for everyone involved. She’s been decorating out the wazoo and mixing a bunch of festive drinks like this one. To be honest, we’re hoping she drops some more delicious cocktail recipes like this one soon!