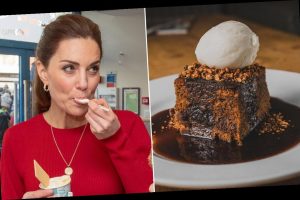 It turns out Kate Middleton is just like us; the Duchess of Cambridge is partial to a pudding after dinner. If you’ve ever wondered what her favourite sweet treat is, look no further because we’ve unearthed the recipe for her ultimate decadent dessert – sticky toffee pudding.

MORE ROYAL RECIPES: The Queen’s favourite dessert is a must-try

Kate is known to be a fan of the quintessentially British staple, served at the Old Boot Inn in Stanford Dingley, Berkshire. Chef Rody Warrot told People: “Kate is always discreet and has always complimented the dishes with great kindness… For dessert, her favorite is sticky toffee pudding. It’s moist and spongy.”

Darren – who cooked for The Queen, Prince Philip, Princess Diana, and Princes William and Prince Harry for 15 years – shared a step-by-step guide to making the dish on his official website, The Royal Chef.

He previously revealed that the Queen – who has famously strict rules about her food – was also a big fan of the dessert. “The Queen loved this at Sandringham Palace when it was really cold outside, when she was at Balmoral Castle, and the rest of the royal family did too”, he said.

For the sticky toffee pudding sauce:

Prepare the sauce by adding all of the ingredients to a heavy based pan. Stir over high heat until everything is combined. Bring to a boil and simmer for 4 minutes.

Pour about 1 ½ cups of the sauce into a greased 2 pint pudding basin and allow to cool. Save the remaining sauce to pour over the pudding.

Place the dates in a bowl with the bicarb soda and the boiling water. Stir until the soda dissolves and leave to cool. Steps one and two can be done a day ahead.

Cream the butter and sugar until light and fluffy, add the egg and vanilla and keep beating. Fold in the flour and baking powder followed by the date mix and chocolate chips. Spoon the mix into the bowl on top of the cold sauce.

Steam the pudding in a double boiler for about 1 ½ hours. When the pudding is ready, reheat the remaining sauce. Invert the pudding onto a warm plate and pour over the sauce.

TRY THIS: You won’t believe what Prince William’s favourite curry is