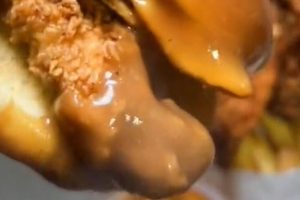 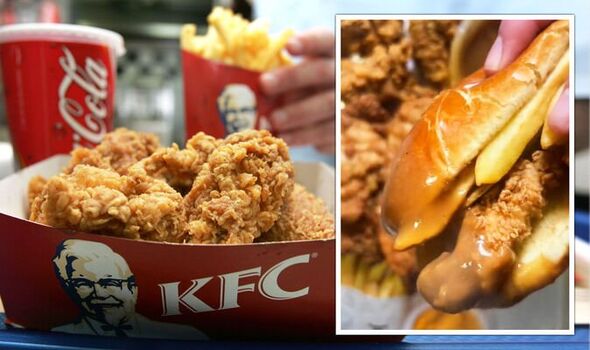 Ollie is a British content creator with a huge 400,000 followers on his TikTok account @ollie_eats. He took to the social media platform to show his delicious-looking KFC menu hack.

Ollie’s hacks have amassed almost 10M “likes” on the app, and this one has been popular, with almost 300K views. The menu hack involves a hot dog bun, Edam cheese, and a popular KFC sauce.

First Ollie takes a brioche hot dog bun and opens it, laying it facing upwards. Then he lays two slices of Edam cheese across it.

He grills this until the bun is toasted and the cheese is melted. Then, he puts his two chicken tenders and his KFC chips into the bun, and then adds the Supercharger Sauce and candied jalapenos.

KFC’s famous spicy mayo Supercharger Sauce appears in its hot burgers and “flamin’ wraps”. Ollie said “Squish it together, add it to my chicken order, and dipped it in the KFC gravy. Boom.”

Fans were quick to praise the recipe, with one writing ‘”just wow ” while another said, “banging, Ollie!”

“I’ll be honest, looks amazing,” another fan said, while one wrote: “This needs to be on the menu it looks class.”

Another said: “Mate they have this in France on the menu at KFC.”

But some were not so convinced of the hack. One was skeptical of mixing gravy with the spicy sauce. They said: “You actually can’t have supercharger and gravy though, doesn’t work.”

Others were disappointed over the inclusion of the fast food brand’s chips. “Chips ruin it,” one said, and another wrote: “KFC chips are so dead these days.”

There are some legendary KFC “secret menu” items fans of the brand can deploy according to rumours spread online.

This includes the infamous “Triple Down”, the natural continuation of the “Double Down”.

The Triple Down is a triple-decker version of the Double Down, which replaced bread with chicken. It includes three pieces of fried chicken with cheese and bacon and no bun.

It is also said some KFC branches will serve the Canadian delicacy poutine, a dish with fries, cheese curds, and gravy.

McDonald’s fans have been treated to a trick to get fresh fries every time from the fast food titan. The McDonald’s fries hack was suggested by content creator @healthyjunkfood.

“Next time you hit up the drive-through ask for a medium fry with no salt.

“We all know they will make it fresh and hot this way, but the new hack is when you roll up to the window and politely ask them for a medium cup and salt packets.

“Pour a few salt packets into the cup, dump in your fries and shake them up.

“With the residual oil, the salt will stick to the fries nicely giving you hot, fresh salted fries.”