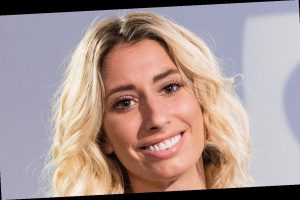 Earlier in January, Stacey Solomon‘s kitchen crisp hanger went viral, and the Loose Women star is back at it with her rotating can holder! Taking to Instagram, the 30-year-old paired a Lazy Susan and a cake stand to create an ingenious device that she can store her canned goods on. The star explained that she had removed tins – tomato soup, tuna, beans, you name it! – from her “long cupboard” and was going to store the food elsewhere.

She told the camera: “I am sorting out the tins today, woohoo! They were in the long cupboard, but now I am going to use a Lazy Susan – because you know how much I love them – and one of my cake stands – because where else am I going to store it – and [I’ll] put that on there and I am going to load her up.”

MORE: Stacey Solomon’s star-print Topshop dress is back in stock – but for how long?

Stacey could then be seen stacking the colourful cans of food on to the nifty invention and added: “I’m going to make sure all the labels are facing outwards so I know exactly what I’ve got in there. I don’t know why this brings me so much joy.” We have to admit, the end result certainly did look impressive.

Earlier in January, Stacey’s crisp hanger was even awarded its very own segment on Loose Women after the former X Factor star clipped packets of crisps onto spare shower curtain rings on a rod inside her kitchen cabinet. To top things off, Stacey colour-coordinated the snacks! Now that’s enough to give Mrs Hinch a run for her money…

The presenter later admitted she didn’t understand how it had escalated so much and why people were so shocked. “In my defence, the boys were at their dads’, the baby sleeps three times a day and Joe was at Dancing on Ice,” she joked, adding that she likes to “tidy round and put things in their place” when she gets the opportunity. The mum-of-three revealed that wasn’t even the extent of her organisation, as she had also displayed sachets of rice and pasta in the same way.