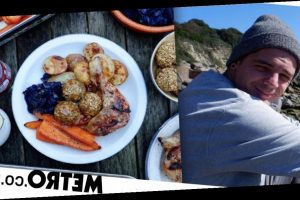 At this time of year money can be tight at the best of times, let alone after the job losses, furloughs, and uncertainty we’ve seen in 2020.

You can still celebrate your Christmas – complete with big dinner – on a budget, though, as this recipe from Edward Crofts, 27, from Palgrave, Suffolk, proves.

The budget cooking enthusiast and Founder of Quid Kitchen, which shares inspiration for £1-per-portion recipes, has created a hearty Christmas dinner for just 94p per head.

Better still, it’s a nice, filling portion, only required 20 minutes prep, and – according to Edward – ‘tastes delicious’ too.

‘People expect their Christmas dinner to be a plate piled high so it was important for me to produce a meal that looks like you have a decent amount of food,’ Edward told money-saving community LatestDeals.co.uk.

‘It’s quite a large meal, considering the price. The picture accurately represents how much food you would get in a portion.

‘I tested it out on friends and family, including my in-laws who loved it. There was minimal food wastage, too, which was impressive.’

‘I started researching ingredients to work out the best way of putting together the Christmas dinner so that each portion was legitimately less than £1, without having to rely on any extra store cupboard ingredients,’ Edward says.

‘I built it around the staples I considered important: meat, potatoes, vegetables, gravy and stuffing. I quickly realised that turkey wasn’t going to be an option, as it’s more expensive than chicken. Next, I began looking at the different cuts and what was the cheapest. The answer was the legs.’

Following that, he had to decide which vegetables would make the cut.

‘I looked into various vegetables to add, such as sprouts, but at the time they were a bit more expensive than the other veg I selected,” he says. “The closer you get to Christmas, however, the prices can get crazy low so if you are making this meal during Christmas week, you may be able to get more veg for your money.’

‘I got everything in Aldi, bar the onion, but that’s only because I forgot it so popped to Asda to pick it up,’ adds Edward.

His quick and easy recipe means you won’t be slaving over a hot oven all day either.

‘Christmas dinner can be stressful to make but mine is very easy,’ he says. ‘It all goes into the oven at a similar time and there’s no faffing around. All you need to do is prep the chicken by removing the thighbones, and stuff it with the diced onion with the cranberry sauce.’

Some clever cooking hacks helped Edward to stick to his goal.

‘I worked out that the cheapest way to make the gravy was from a sachet of chicken casserole seasoning mix,’ he reveals. ‘Traditional granules would have yielded a lot more gravy but they were more expensive as they came in larger packets of around 500g.

‘To keep it to £1 per head it worked out better to buy a smaller 25g sachet that could be easily split between the four meal potions. I guarantee if you were to do a blind taste test between your usual gravy and my sachet mix gravy, you would not taste the difference.’

If you’re yet to pick up your Christmas food, Edward has some advice for staying on track.

Edward was inspired to start Quid Kitchen back in March after the pandemic hit when he was travelling.

Once he got home and was living with his parents, he thought about the hardship people had faced, and decided to subvert some budget food sites that rely on people buying large amounts of food and splitting it up (or require extra ‘storecupboard’ staples).

He says: ‘I wanted to create recipes that cost exactly what I say they do – with no hidden ingredients to be added. Each of my recipes cost less than £1 to make, and I also compile five and seven-day meal plans to follow.

‘When I speak to people about recipes and costing often I’m met with quite a lot of skepticism trying to convince people that you can cook hearty meals for less than £1. But when you show the mathematics behind it and the ingredients that go into each meal, it’s easy to see how it can be done.’

When it comes to supermarket shopping, Edward says the best value option depends on the individual.

‘People can argue all day long about what supermarket is best for a budget food shop but it depends on what you are buying,’ he says.

‘You need to look at where you can get your favourites and staples for less and go from there. I wouldn’t encourage people to drive around from shop to shop, or go miles out of their way.

‘For Quid Kitchen, I mostly use prices from Asda, as it’s the most convenient supermarket for me. I never use promotional prices in my recipes, such as the 19p spuds for Christmas, as I want people to be able to use the recipes at any time. Of course, if you know what you are going to eat and go into a shop with that list of ingredients, you stand a much higher chance of staying on budget.’

END_OF_DOCUMENT_TOKEN_TO_BE_REPLACED

END_OF_DOCUMENT_TOKEN_TO_BE_REPLACED
We and our partners use cookies on this site to improve our service, perform analytics, personalize advertising, measure advertising performance, and remember website preferences.Ok